Home > Back to Search Results > A ploy by Vermont to nudge America to recognize her as a state...
Click image to enlarge 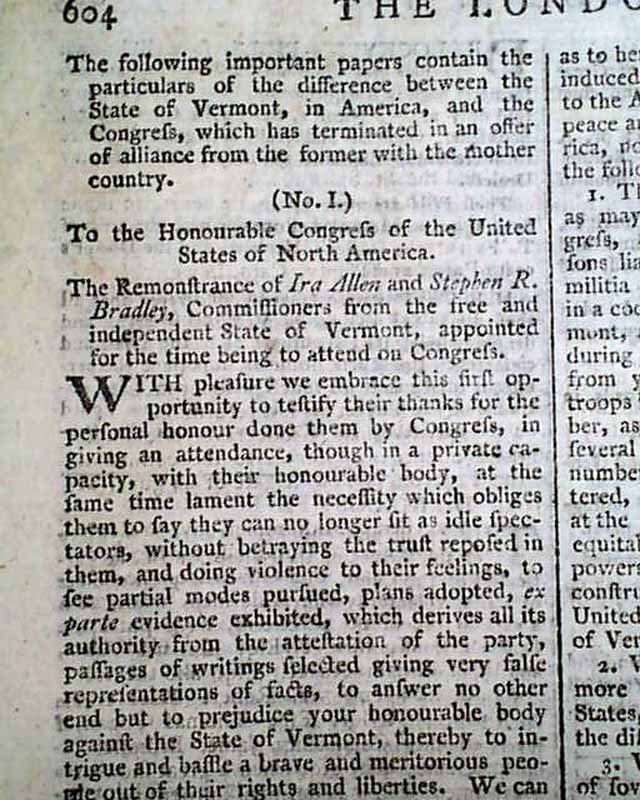 A ploy by Vermont to nudge America to recognize her as a state...


THE LONDON CHRONICLE, England, June 25, 1782  All of page 4 is taken up with some great letters and documents concerning the Haldimand Affair (see the web for more), two of the documents signed by Ira Allen, a leading figure in the declaration of the Vermont Republic in 1777. He and his brother Ethan were involved in the Haldimand Affair suggesting Vermont might join the British. An alternate explanation is that they used the Haldimand negotiations to both stave off a British invasion of Vermont from Canada and to prod the Continental Congress into recognizing Vermont as an entity separate from New York and New Hampshire and admitting it to the United States.
Page 5 has a letter from New York beginning: "The Rebels have been assured by the French that they are to have no more pecuniary assistance from that quarter. The dependence of the Congress is upon eight millions of dollars which they demand of the United States for the present year..." and more.
The back pg. has a bit noting: "...that General Washington has determined to oppose all overtures from this country on the subject of negociating a separate peace with America; but that he speaks of the highest respect of the new administration & laments that they did not come into power before America had contracted alliances, to which both her honour & interest will compel her strictly to adhere."
Eight pages, 8 1/2 by 11 1/2 inches, very nice condition.