Home > Back to Search Results > Off to Savannah, Georgia... Early on the game of chess...
Click image to enlarge 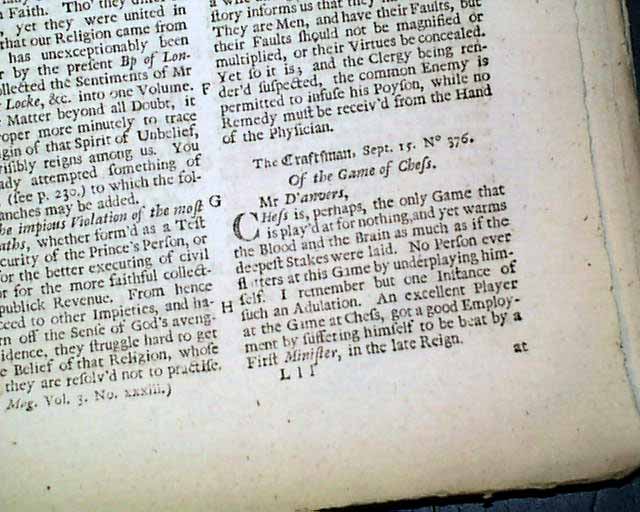 Off to Savannah, Georgia... Early on the game of chess...

Near the back is a short bit reading: "Embarked on board the Savannah, 132 persons for the new Colony of Georgia."
There is also a very nice & early article on the game of chess, headed: "Of The Game of Chess" which begins: "Chess is, perhaps, the only game that is play'd at for nothing & yet warms the blood & the brain as much as if the deepest stakes were laid..." with much more, taking close to a full page in total (see for portions).
Among other articles are: "Debate in the House of Lords upon the Mutiny Bill" "Quotations from Gulliver's Voyages" "The Rights of the King and People" "Proposals to Refrain Infidelity" "Address to the Protestant Dissenters" & more.
No plates or maps were called for.
Complete in 56 pages, 5 by 8 inches, full title/index page, nice condition.