Home > Back to Search Results > Cook's voyage to the Northwest coast with a related print...
Click image to enlarge 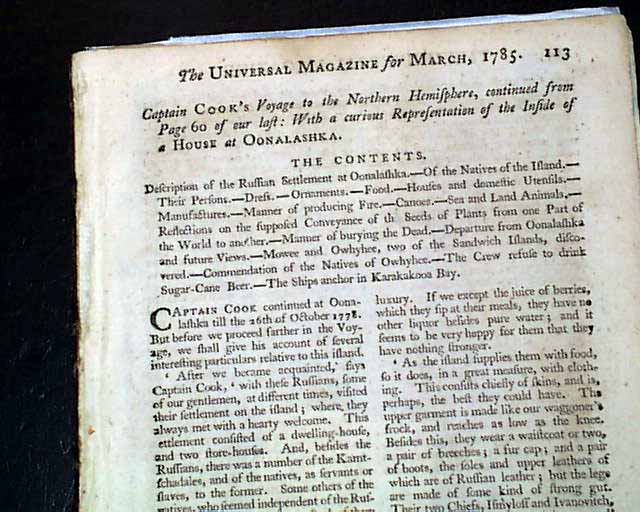 Cook's voyage to the Northwest coast with a related print...

This magazine--much more scarce than the Gentleman's Magazine--published in serial form the account of: "Captain Cook's Voyage to the Northern Hemisphere...", this issue containing reports from after October, 1778 when he was exploring the far northwest coast of North America in search of a Northwest passage to the Atlantic, extending into what are now called the Aleutian Islands & to the Bering Strait then the Arctic Ocean before having to turn back due to ice.
As noted in "The Content" at the beginning of the front page, topics include: "Description of the Russia Settlement Oonalashka--Of the Natives of the Island--Houses & Domestic Utensils--Departure from Oonalashka & Future Views--Mowee and Owhyhee, Two of the Sandwich Islands Discovered--Commendation of the Natives of Owhyhee..." and much more (see), with the very detailed text taking 5 1/2 pages. The last portion of this narrative covers Cook's return to Hawaii with much detail, the last report from his journal dated January 16, 1779. Cook would be killed in Hawaii in February, and the conclusion of this article notes: "...Here Captain Cook's Journal ends...The remaining transactions of the voyage are related by Captain King...".
Of significance is that the rare full page plate is still present, showing: "The Inside of a House in Oonalashka" (see). The print is in very nice condition.
Two additional but unrelated prints are included here as well.
Contains 56 pages. As was typical with the Universal Magazine, it had no full title/contents page but rather an outer wrapper which served that purpose, but the wrappers were typically removed when the issues were bound. The top of the first have has the title and date. We are also including a photocopy of the volume's full title page as further verification of the title & city of publication (see). Measures 5 by 8 inches, very nice condition.