Home > Back to Search Results > Cook's voyage to the Northwest coast with two related prints...
Click image to enlarge 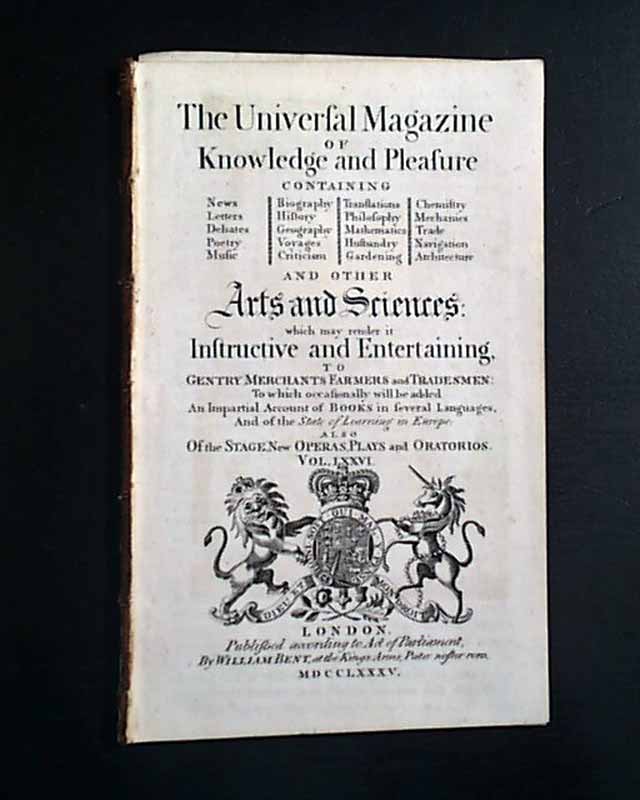 Cook's voyage to the Northwest coast with two related prints...

This magazine--much more scarce than the Gentleman's Magazine--published in serial form the account of: "Captain Cook's Voyage to the Northern Hemisphere...", this issue containing reports from after July, 1778 when he was exploring the far northwest coast of North America in search of a Northwest passage to the Atlantic, extending into what are now called the Aleutian Islands & to the Bering Strait then the Arctic Ocean before having to turn back due to ice.
As noted in "The Content" at the beginning of the article, topics include: "Departure from Oonalashka--The Most Westerly point of America named Cape Prince of Wales--Ships Anchor in a Bay on the Eastern Extremity of Asia--Behaviour of the Natives--The Ships Cross the Strait to the Coast of America..." and so much more (see), with the very detailed text taking 4 1/2 pages.
Of significance is that the rare full page plate is still present, showing: "Tschutski and Their Habitations" (see).  Also included is the frontispiece plate for the volume which is an allegorical print concerning Capt. Cook (see photos for the "Explanation of the Frontispiece"), and which includes a bust of him. Cook was killed by natives of Hawaii near the end of this, his 3rd voyage.
Also within the issue is a detailed account of the first balloon flight across the English Channel by the famed Mr. Blanchard (see).
A third full page plate is included as well.
Contains 56 pages. As was typical with the Universal Magazine, it had no full title/contents page but rather an outer wrapper which served that purpose, but the wrappers were typically removed when the issues were bound.  But this being the first issue of the year the volume's full title page and the Preface--with Cook-related content--are still attached (see). Measures 5 by 8 inches, very nice condition.