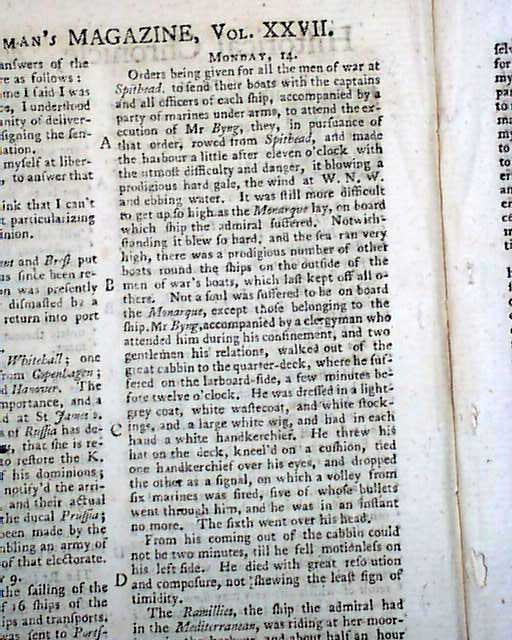 The prime feature of this issue is a large foldout map titled: "A Physical Planisphere wherein are represented all the known Lands & seas in the Great Chains of Mountains which traverse the Globe from the North Pole...". It is a map of the world from the perspective of the North Pole. Typically this map is missing from the issue due to its desirability so we are pleased to be able to offer it along with the issue. It folds out to measures 12 by 14 inches. There is a related article as well.
The issue begins with over four pages taken up with the: "Trial of the late Admiral Byng...". Byng is best known for the loss of Minorca in 1756 at the beginning of the Seven Years' War. He was court-martialed and found guilty of failing to "do his utmost" to prevent Minorca falling to the French following the Battle of Minorca. He was sentenced to death and shot by firing squad on March 14, 1757. Near the back of the issue in the "Historical Chronicle" is a fine account of his final moments and his last letter signed by him in type: J. Byng. A portion of the text includes: "...walked out of the great cabbin to the quarter-deck...He was dressed in a light grew coat, white waistecoat...and a large white wig, and had in each hand a white handkerchief. He threw his hat on the deck, kneel'd on a cushion, tied one handkerchief over his eyes & dropped the other as a signal, on which a volley from six marines was fired, five of whose bullets went through him & he was in an instant no more...".
Also near the back is a report headed: "America" with news from Charleston telling of troubles with the Indians. There is also a full page plate of sea shells.
Complete in 48 pages full title/contents page featuring an engraving of St. John's Gate, 5 1/2 by 8 1/4 inches with wide, never-trimmed margins, great condition.