Home > Back to Search Results > Map of the Coast of France... Map of a portion of India...
Click image to enlarge 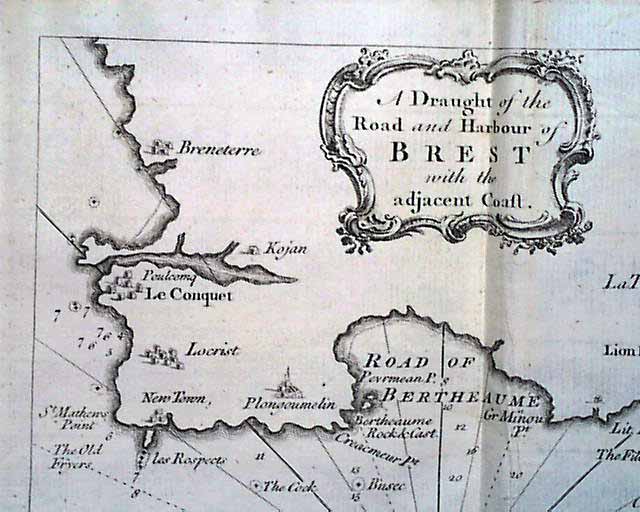 Map of the Coast of France... Map of a portion of India...

Item # 639929 GENTLEMAN'S MAGAZINE, London, September, 1757  Articles include: "Curious Accounts of the Present Comet" which includes a nearly half page print relating to it (see images); "Account of Medical Observations & Inquiries" "Aneurysm of the Aorta" "Fire Engine--Earthquakes--Microscopical Observations" and more.
There is also a nice & lengthy: "Account of the late Disputes between the Assembly of Pennsylvania & their Present Governor William Denny" which takes over 2 pages, and is signed in type at its conclusion: William Franklin (see for portions). In actuality this item was written by Ben Franklin (see: "The Writings of Benjamin Franklin: London, 1757-1775"), supported by a note in the last paragraph (see images): "The above are facts, consistent with the knowledge of the subscriber, who but lately left Philadelphia, is now in London, is not, nor ever was, a Quaker...". Ben Franklin was in London in 1757.
Another article is headed: "Extract of a Letter from an eminent Physician of the Province of New York, concerning an Indian Remedy for the Venereal Disease" which takes half a column.
Included is a large foldout map titled: "A Draught of the Road and Harbour of Brest with the Adjacent Coast", which measures 8 by 18 inches & is in very nice condition (see images).
Included is another full page map titled: "A Map of the Mouths of the Ganges in the Bay of Bengal, shewing the English Settlements Lately Destroy'd by the Nabob of that Province".
Near the back is the "Historical Chronicle" with various news of the day & which includes an item headed: "America" which notes: "...the military operations in America seem to be totally suspended..." (see images).
Complete in 48 pages, 5 by 8 inches, full title/contents page with an engraving of St. John's Gate. Very nice condition.