Home > Back to Search Results > British and Americans preparing for war...
Click image to enlarge 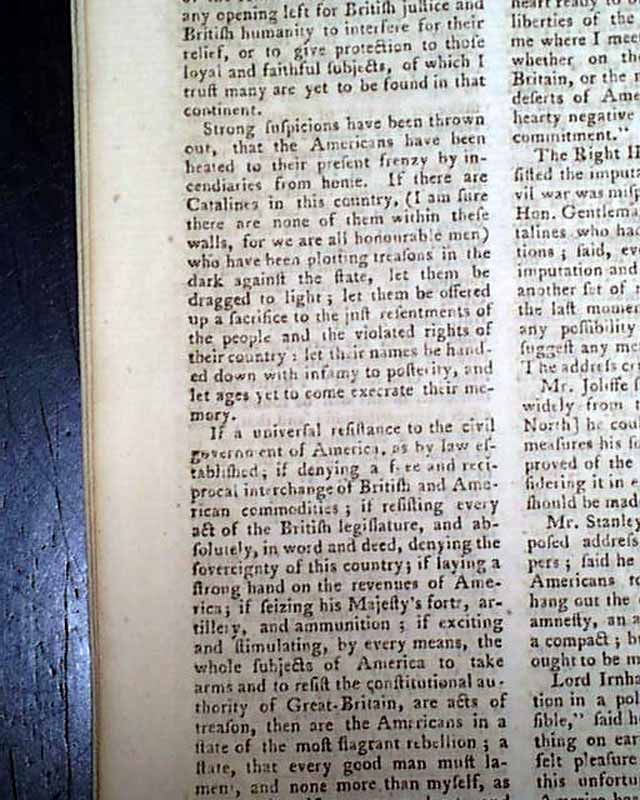 Item # 639730 THE GENTLEMAN'S MAGAZINE, London, England, April, 1775  The first article is a continued debate: "...respecting the Situation of Affairs in America" with discussion of the potential consequences of action, This report takes over 5 pages. Included is: "...If a universal resistance to the civil government of America...if denying a free & reciprocal interchange of British & American commodities; if resisting every act of the British legislature...denying the sovereignty of this country...if seizing his Majesty's forts, artillery & ammunition; if exciting & stimulating, by every means, the whole subjects of America to take arms & to resist the constitutional authority of Great Britain are acts of treason, then are the Americans in a state of the most flagrant rebellion..." with so much more. Photos show only portions.
There is a review of a publication titled: "An Answer to a Pamphlet entitled Taxation No Tyranny..." (see). Another article is headed: "Reflections on the Slavery of the Negroes".
There is some fine reading in: "Proceedings of the American Colonies Since the Passage of the Boston Port Bill" which takes over two pages, mentioning: "...soldiers & sailors stationed at Boston are become very uneasy...the Americans are in this manner preparing for opposition..." and much more. Another nice article: "The Humble Address & Petition of the Merchants, etc. Concerning the Commerce of North America" speaks to the economic concerns of war. And near the back is a very prophetic statement: "...Letters of good authority from America affirm that the militia of Massachusetts bay & Connecticut are actually embodied...and are assembled to the number of 12,000 effective men...a considerable body were on their march to Boston; so that there is not a doubt but that the next news will be an account of a bloody engagement between the two armies." (see)
Included is the full page plate: "Curiosities found in the Ruins of Herculaneum".
Complete in 52 pages, full title/contents page with an engraving of St. John's Gate, 5 by 8 inches, very nice condition.

A very nice and extremely popular magazine from the "mother country" from the very month the Revolutionary War began. This was the first periodical to use the word "magazine" in its title, having begun in 1731 and lasting until 1907.