Home > Back to Search Results > Reports from the Confederacy...
Click image to enlarge 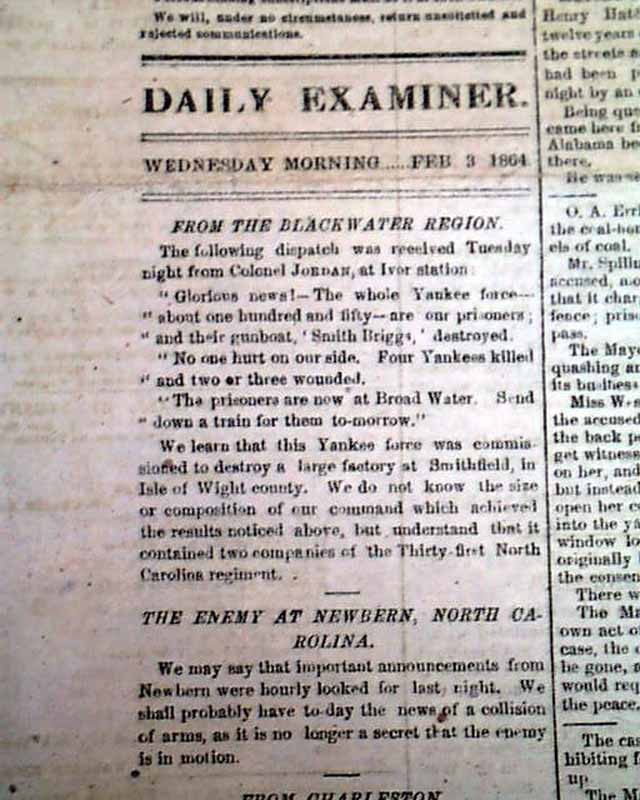 Reports from the Confederacy...

A newspaper from the capital of the Confederate states, the city through which all news reports flowed during the Civil War. The front page has much on the war with items headed: "From the Blackwater Region" "The Enemy at New Bern, North Carolina" "From Charleston" "Arrest of Ex-Senator Toombs in Savannah" "The New Conscription" "The Currency Bill" "Movements on the Mississippi" "Revelations From Richmond" "The Yankee Army--Enlistment of Negro Soldiers" "and other items as well.
The back page includes the always interesting editorial, this one focused on the gold standard for the Confederacy (see for the beginning). also on the back page is much reporting from: "The Confederate Congress" and "The Virginia Legislature" as well as "Execution of a Woman at Chester, England" "A Yankee Lie" "Comfort for Substitute Men" "The Writ of Habeas Corpus in Georgia" and a few other smaller items.
Complete as a single sheet newspaper with a banner masthead. A piece missing from the masthead is above all type and affects noting. Faint library stamp in the upper left and generally in very nice condition.