Home > Back to Search Results > Reports from the Wild West...
Click image to enlarge 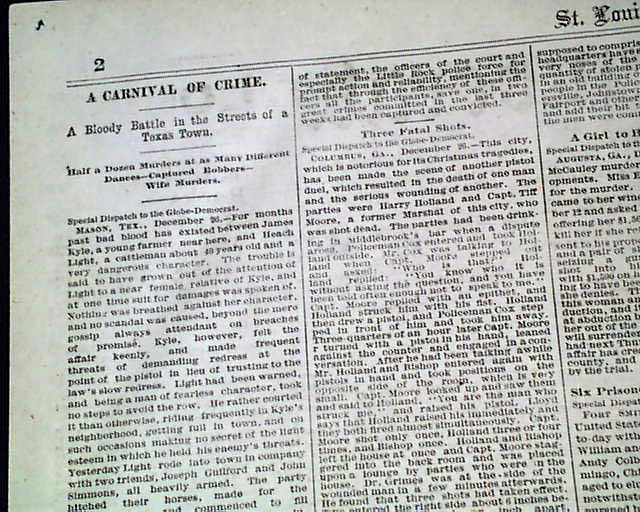 Reports from the Wild West...


ST. LOUIS GLOBE-DEMOCRAT, Nov. 9, 1884  Likely due to its location on the edge of the Western frontier, this newspaper typically contained a wealth sensational crime reports and events from the West than found in eastern newspapers. Page 2 begins with: "A CARNIVAL OF CRIME" "A Bloody Battle in the Streets of a Texas Town" "Half a Dozen Murders in as Many Different Dances--Captured Robbers--:Wife Murders". Subheads include: "Sentencing the Train Robbers" "Death at a Dance" "Brutal Wife Murder" "The Pandora Robbery" "Three Fatal Shots" "Sentenced for Killing Horses".
Other articles include: "A Famous Scout - The Exciting Career of Jim Beckwourth, a Former Missourian" "Fire-Proof Indians--How the Hashkawn Dance is Performed at the Navajo Agency" "Texas Penitentiaries".
Sixteen pages, very nice condition.