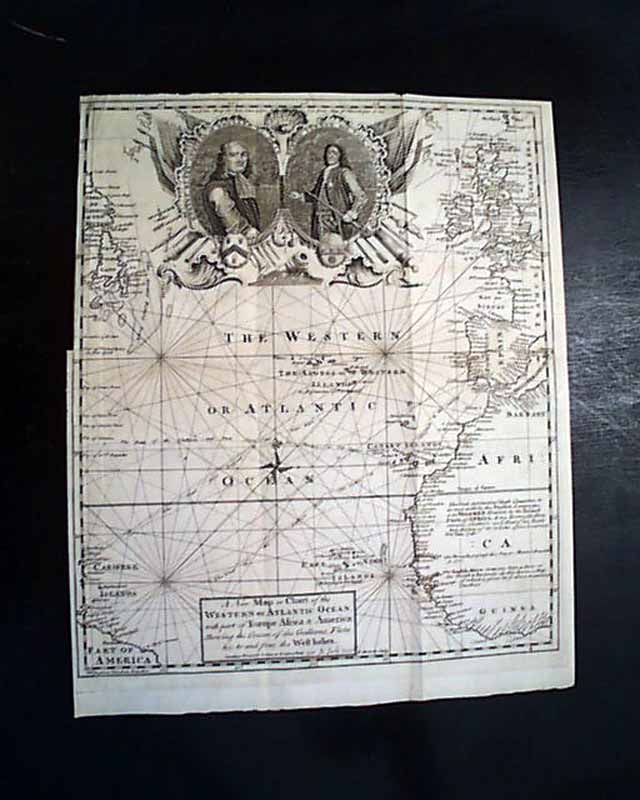 Certainly the prime feature of this issue is the terrific foldout map titled: "A New Map or Chart of the Western or Atlantic Ocean, with part of Europe, Africa, and America: Shewing the Course of the Galleons, Flota etc. to and from the West Indies." This map shows the majority of the Atlantic Ocean as well as all of England, Spain, portions of France and Western Africa, the Canary Islands, the Azores, and the eastern portion of the Caribbean Islands, a bit of South America, and all of Newfoundland & the surrounding islands. There is a very large & exceedingly decorative engraving at the top of the map showing "Robert Blake, Admiral of England" and "Edward Vernon, Esq., Vice Admiral of the Blue" (see the many photos). The map measures 12 by 15 inches, a few folds, a few small archival mends to the blank reverse, bit close-trimmed at the upper left margin just touching parts of the border but with no loss. This would be a beautiful item for display.
This map is referenced in the title/index pg., verifying the date & that it belongs to this issue (see).
An article in this issue is titled: "Articles of Capitulation granted by Edward Vernon...in the West Indies to Don Juan Carlos...of the Castle of St. Lorenzo, at the Mouth of the River Chagre."
Among the articles noted in the Table of Contents are: "Destructive Effects of War" "Why we are at War with Iberia" "War Preferable to the Peace we Enjoy'd" "The Embargoes absolutely Necessary" "Our Constitution Endangered by our Immense Debts" "Nature & Injustice of the Negro Trade inquired into..." "Remark Upon Milton's Paradise Lost" "Opinion of the High Admiral of Spain of an Expedition of Sir F. Drake's" & more.
Near the back is a report which includes: "As to the progress of the war against the Spaniards at Fort St. Augustine...we have to add that the Castle was bomb proof, the walls 50 foot high & that the Spaniards had poison'd the waters about it...the place will not long hold out against the good conduct & bravery of General Oglethorpe. Some ships just arrived bring account that he was made himself master of it..." with more (see).
Complete in 40 pgs. with full title/index page.  The magazine measures 5 1/4 by 8 1/2 inches, tiny binding holes at the blank spine margin, very nice condition.