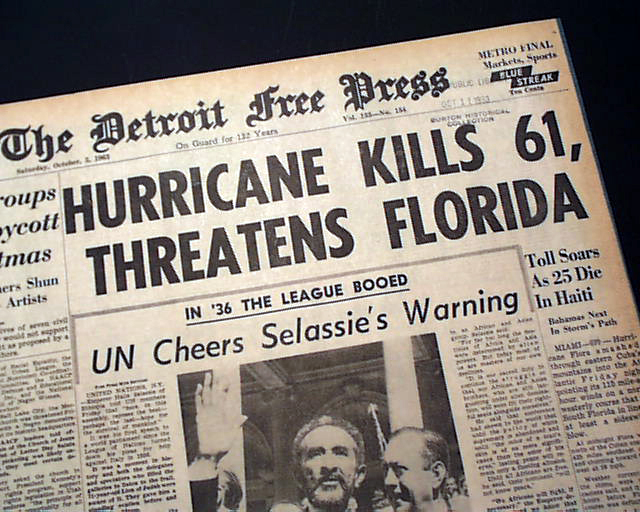 * Hurricane Flora - one of the Caribbean's wettest Hurricanes on record
* Historic devastation to Haiti and surrounding region
* Over 7,000 deaths

This 28 page newspaper has a nice six column headline on the front page: "HURRICANE KILLS 61, THREATENS FLORIDA" with subheads. (see)

Other news of the day throughout. Light browning with some small bindings holes along the spine, otherwise in good condition.

wikipedia notes: Hurricane Flora is among the deadliest Atlantic hurricanes in recorded history, with a death total of over 7,000. The seventh tropical storm and sixth hurricane of the 1963 Atlantic hurricane season, Flora developed from a disturbance in the Intertropical Convergence Zone on September 26 while located about 755 miles (1,215 km) southwest of the Cape Verde islands. After remaining a weak depression for several days, it rapidly organized on September 29 to attain tropical storm status. Flora continued to quickly strengthen to reach Category 3 hurricane status before moving through the Windward Islands and passing over Tobago, and it reached maximum sustained winds of 140 miles per hour (230 km/h) in the Caribbean Sea.

The storm struck southwestern Haiti near peak intensity, turned to the west, and drifted over Cuba for four days before turning to the northeast. Flora passed through the Bahamas and accelerated northeastward, becoming an extra-tropical cyclone on October 12. Due to its slow movement across Cuba, Flora is the wettest known tropical cyclone for Cuba, Haiti, and the Dominican Republic. The significant casualties caused by Flora were the most for a tropical cyclone in the Atlantic Basin since the 1900 Galveston Hurricane.