Home > Back to Search Results > The Yankees are growing tired of the war...
Click image to enlarge 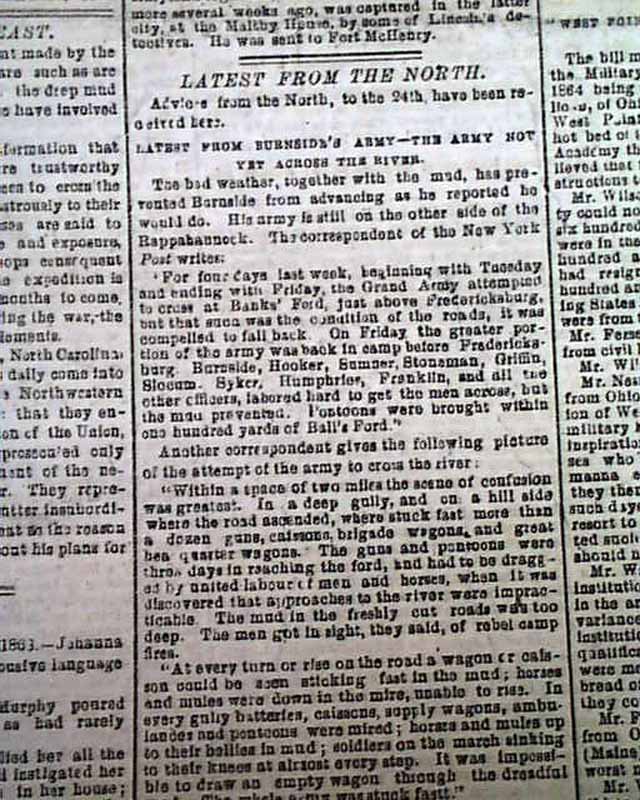 The Yankees are growing tired of the war...


DAILY RICHMOND EXAMINER, Virginia, January 30, 1863  A nice newspaper from not only the Confederacy, but from the capital of the Confederate states. Among the front page reports are: "The War In the East" "City Intelligence" "the White Flag" "Castle Thunder Items" "What the Yankee Soldiers Say & Think of the War--Growing Sick of the Job of Crushing out the Rebellion--Growing Discontent & Depression" "Latest From The North--Latest from Burnside's Army--The Army Not Yet Across the River" "Special Message from the President in Regard to the Payment of the Army & Navy--Lincoln Gives His Views on the Currency...He is Snubbed by Congress" "The Yankee Iron Clad Navy--Launch of two More Monitors..." "Telegraphic News" and other smaller items.
The back page includes the always interesting editorial, which begins: "Like the gambler, whose last stake is on the table, the North now regards the next turn of the cards with the indifference of despair. The enormous losses already incurred presage the disasters of the future...The Yankee army in the field is the very last stake of the North. When that is gone, the desperate game of war can be played no more..." with much more. Also on the bkpg. is much reporting from "The Confederate Congress" as well as reports from the "Virginia Legislature". There is also: "Notes Of The War" "Latest From Texas--Proclamation from General Magruder" which is signed by him in type: J. B. Magruder (see).
Complete as a single sheet newspaper with a full banner masthead, very nice condition.