Home > Back to Search Results > Two consecutive issues have a lengthy speech regarding America...
Click image to enlarge 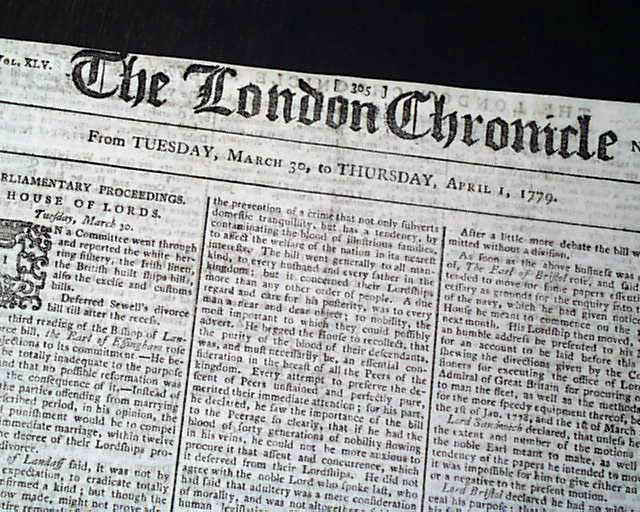 Two consecutive issues have a lengthy speech regarding America...

THE LONDON CHRONICLE, England, a pair of consecutive  issues containing in full the lengthy: "Governor Johnston's Speech...on Mr. Fox's Motion for a Vote of Censure on Administration for not Sending out a Reinforcement earlier last year to Lord Howe at New York" which obviously has much concerning America.
April 1, 1779: Bits include: "...Mons. d Estaign had found our army at Philadelphia and our shops in the Delaware that the army would have been starved & the shipping destroyed...I maintain, as I always have done, that the abandoning Philadelphia at the moment we did, was mostly fatal to our affairs in North America...If General Clinton had been to begin his campaign in Pennsylvania, undoubtedly he would have had a larger stock of provision in store there...The fertile countries of the Jerseys & Pennsylvania & the lower counties on the Delaware would have been open to us...On the first movement of our troops, Washington must have crossed the Susquehannah & left all those plentiful regions to our forage..." with much more. This report concludes in the next issue (see below).
April 3, 1779: The lengthy: "Governor Johnstone's Speech..." continues & concludes by taking close to two pages. Simply too much interesting reading to report here, and the photos show only portions. The back page has some items from America including: "We learn that General Lincoln with 7000 regular troops has taken possession of several advantageous posts between the British forces & the town of Savannah...the whole province of South Carolina is arming against him..." (see images).
Both issues are complete in 8 pages, measure 8 by 11 inches. April 1 has one leaf close-trimmed in the bottom half of the beginning of the Johnstone's speech (see images), otherwise they are in very nice condition.