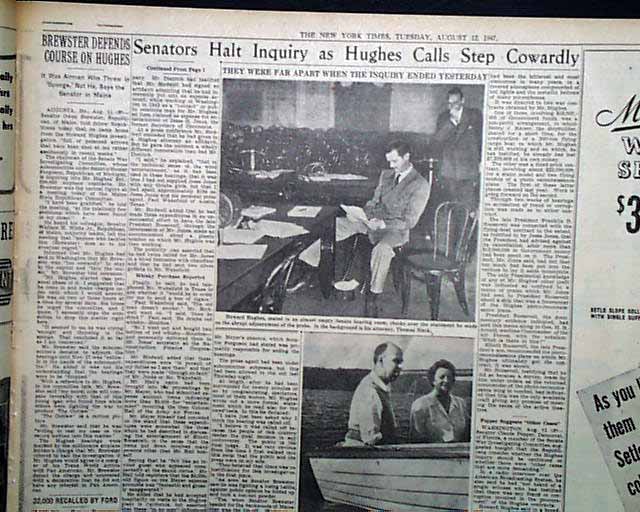 The front page has the single column heading: "SENATORS SUSPEND INQUIRY ON HUGHES; COWARDLY, HE SAYS." The article continues on page 15 where another 5-column heading reads: "Senators Halt Inquiry as Hughes Calls Step Cowardly," which includes additional text and 2 photos.
The issue is believed to be complete in 48 pages, but is being sold for the described content. It is in very good condition, with typical left margin binding holes.

Wikipedia notes: The War Production Board (not the military) originally contracted with Henry Kaiser and Hughes to produce the gigantic HK-1 Hercules flying boat for use during World War II to transport troops and equipment across the Atlantic as an alternative to seagoing troop transport ships that were vulnerable to German U-boats. The project was opposed by the military services, thinking it would siphon resources from higher priority programs, but was advocated by Hughes' powerful allies in Washington, D.C. After disputes, Kaiser withdrew from the project and Hughes elected to continue it as the H-4 Hercules. However, the aircraft was not completed until after the end of World War II. The Hercules was nicknamed the "Spruce Goose" by critics, but was actually made largely from birch (not spruce), rather than of aluminum, because the contract required that Hughes build the aircraft of non-strategic materials. It was built in Hughes' Westchester, California facility. In 1947, Howard Hughes was summoned to testify before the Senate War Investigating Committee to explain why the H-4 development had been so troubled, and why the F-11 had resulted in only two prototypes after $22 million spent.