Home > Back to Search Results > Nazi treatment of Jews considered re. Olympics...
Click image to enlarge 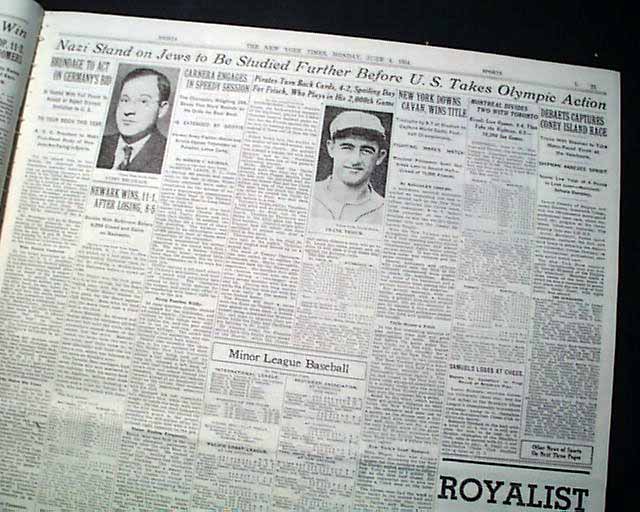 * 1936 Olympics to be boycotted ?
* Persecution of Jews in Nazi Germany

The top of page 21 has a banner headline: "Nazi Stand on Jews to Be Studied Further Before U. S. Takes Olympic Action" with subheads and photo of Avery Brundage. Unusual finding a headline in the sport's section that relates to the treatment of Jews in Nazi Germany.
Other news, sports and advertisements of the day. Complete in 36 pages, this is the rare rag edition that was produced on very high quality newsprint, with a high percentage of cotton & linen content, allowing the issues to remain very white & sturdy into the present. Given the subscription cost, libraries & institutions rather than individuals were the primary subscribers of these high-quality editions. Nice condition.

wikipedia notes: As leader of America's Olympic organizations, Avery Brundage fought zealously against a boycott of the 1936 Summer Olympics, which had been awarded to Germany before the rise of its Nazi government and its subsequent, escalating persecution of Jews. Although Brundage was successful in getting a team to the Games in Berlin, its participation was controversial and has remained so.