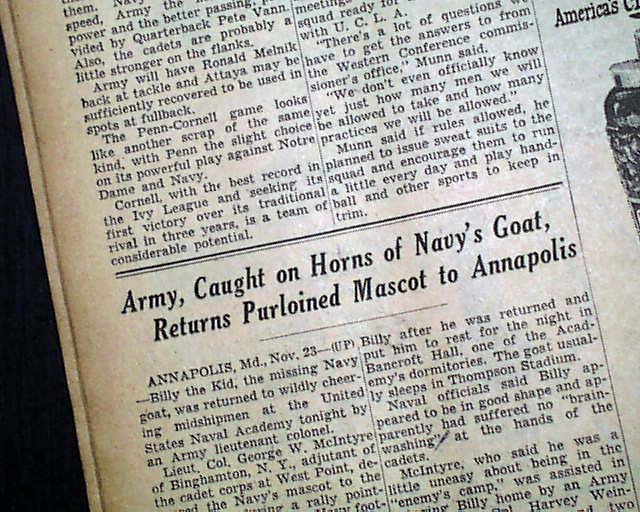 Near the bottom of page 40 is a two column heading: "Army, Caught on Horns of Navy's Goat, Returns Purloined Mascot to Annapolis" (see) Plus reporting on the upcoming game.
Other news, sports and advertisements of the day. Complete in 60 pages, minor spine wear, nice condition.

wikipedia notes: The first recorded kidnapping of Bill in modern times was accomplished one week before the Army-Navy football game in the fall of 1953. A group of cadets from the United States Military Academy (USMA) at West Point sneaked onto the Annapolis grounds with the help of a West Point exchange student who was living at the Naval Academy. After locating the goat behind the stadium, the cadets stashed it in the backseat of a convertible; however, their cover was blown when they stopped at a gas station and the goat's horns shredded the convertible top. The cadets successfully made it back to the USMA and presented the goat to the entire Corps at a raucous dinnertime pep rally; however, many Navy midshipmen refused to go to classes until Bill was returned. After the goat's return was ordered by officials from West Point (as well as President Dwight D. Eisenhower himself, a USMA graduate), the Army cadets staged a mass protest which was posted on the front page of several New York papers as "Goat Rebellion at West Point." The Army football team went on to defeat Navy 20-7.