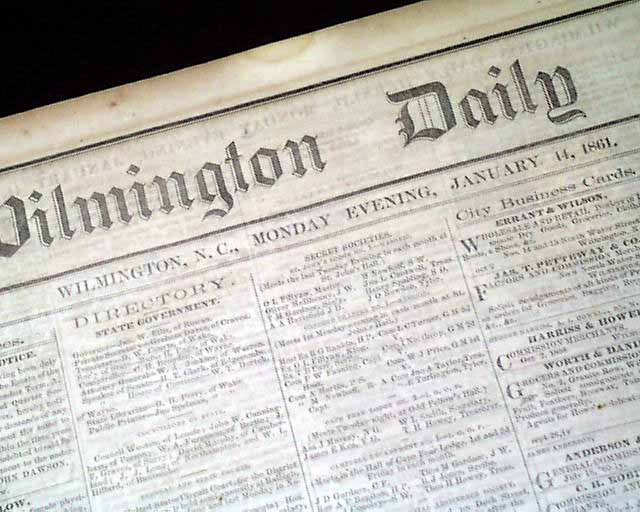 
THE WILMINGTON DAILY HERALD, North Carolina, January 14, 1861  Wilmington was a major Atlantic Ocean port city for the Confederacy during the Civil War, and was one of the last ports to fall to Union forces in 1865. It ranked equal in size to Atlanta according to the 1860 census, and was a major point of entry for supplies for the entire Confederacy, exporting cotton & tobacco in exchange for munitions, clothing & food. As such it was barricaded by Union forces during the war, but blockade runners had some success in getting supplies through. It is just 170 miles north of Charleston, where the Civil War began.
Neighboring South Carolina was the first state to leave the union in Dec., 1860, and although North Carolina did not officially secede until after the bombing of Fort Sumter its political sympathies were strongly with the South ever since talk of secession began.
The front page includes: "A Black Man's Funeral at the South" and another item notes: "If an evidence were required that Kentucky was loyal to the Union sentiment it was afforded last Saturday evening when Mrs. Varian James sang the Star Spangled Banner, at the concert...Every verse was re-echoed back amidst a torrent of applause & the wildest demonstrations of satisfaction..." Also on the ftpg: "Occupation of the Chattahoochee Arsenal" with the balance of the ftpg. taken up with ads and notices.
Page 2 has: "Fort Sumter" which notes: "...certain communications have taken place between the authorities of the state & the commander of Fort Sumter which, it is hoped, may save the effusion of blood..." but of course it would not be, as the Battle of Fort Sumter in early April would mark the beginning of the Civil War. Also on pg.  2: "A Few Thoughts upon the Present State of our Country", and "From Mississippi" notes: "Artillery have been ordered to Vicksburg, to question the passing boats." "Star of the West at New York" notes: "The Star of the West landed her troops on Governor's Island yesterday", and "Tennessee Legislature" notes: "The house passed the Convention bill. The Convention is to meet...The question of secession is to be laid before the people." Plus there are more interesting items as well.
Pages 3 & 4 are entirely taken up with ads. Complete in 4 pages, a piece missing from a lower corner of the front leaf does not affect any mentioned reports, otherwise in nice condition.