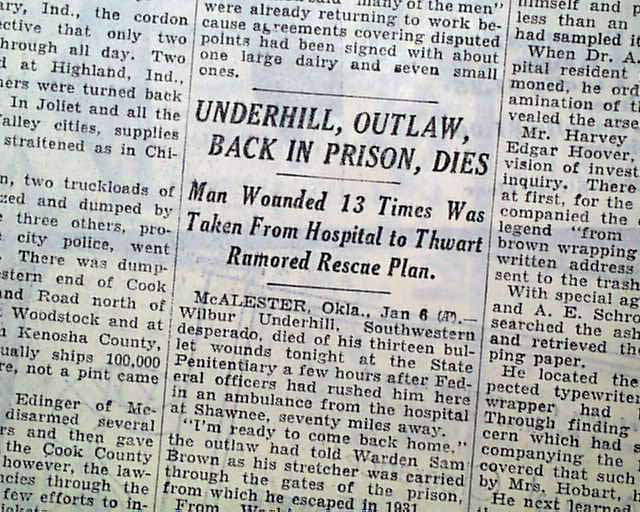 Page 21 has an article headed: "Underhill, Outlaw, Back In Prison, Dies" with subhead. (see)
Other news of the day. Complete 1st section only with all 32 pages, rag edition in nice condition.


wikipedia notes: On December 26, 1933, Wilbur and Hazel Underhill were celebrating their honeymoon with Ralph Roe and his girlfriend Eva May Nichols at a rented cottage in Shawnee, Oklahoma. Four days later, a 24-man strike force including federal agents, state troopers and local police surrounded the house. The group was led by R.H. Colvin and Frank Smith, the latter a survivor of the Kansas City Massacre. When called on to surrender, Underhill began firing resulting in the task force returning fire.

Eva Nichols, an innocent woman, was killed in the gunfight and Underhill, barefoot and still in his underwear, ran from the house attempting to escape. He was hit five times before leaving the yard but ran for another 16 blocks before breaking into a furniture store and collapsing on one of the beds. Ralph Roe, also wounded, was taken into custody with Hazel Underhill. Underhill was taken to McAlester where he remained, handcuffed in his bed, at the prison hospital until his death on January 6, 1934. His last words were "Tell the boys I'm coming home"