Home > Back to Search Results > Interesting perspectives on the situation in America...
Click image to enlarge 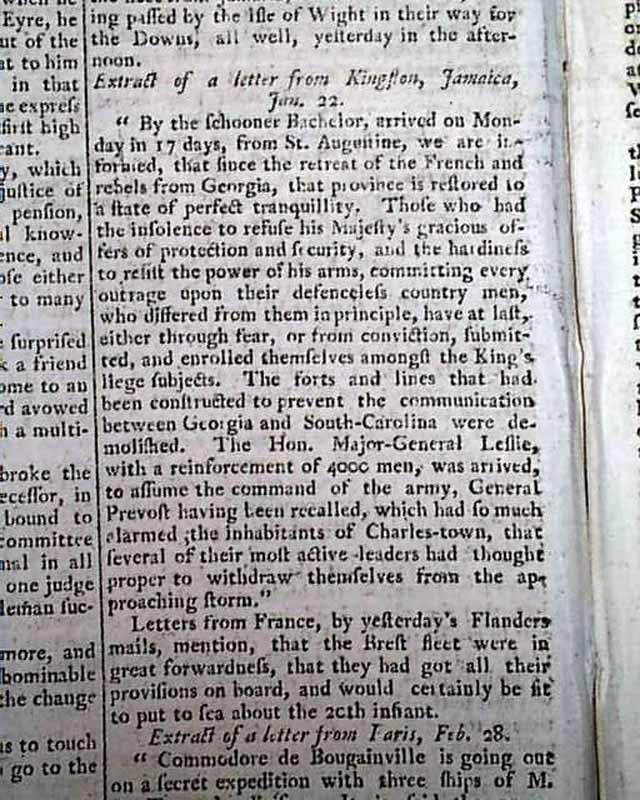 Interesting perspectives on the situation in America...


THE EDINBURGH ADVERTISER, Scotland, March 21, 1780  Page 2 has a report noting: "...we are informed that since the retreat of the French & rebels from Georgia, that province is restored to a state of perfect tranquility. Those who had the insolence to refuse his Majesty's gracious offers of protection & security...have at least, either through fear or from conviction, submitted & enrolled themselves amongst the King's liege subjects..." with more (see). Another page has: "Virginia, the deluded, oppressed & now irritated Virginia, waits but a fit opportunity to shake off the usurped dominion of the Congress that has reduced the provinces from a state of opulence & splendour to the most wretched condition that ever a people experienced..." with more (see images). Another note: "...that the French are preparing a powerful embarkation to make one great effort in favour of America...Let America take care how she trusts such a force on her continent, for it is morally certain the subjection of that country to France is intended." A few other items as well.
Eight pages, 8 1/2 by 11 1/4 inches, nice condition.