Home > Back to Search Results > Print of the siege of Rhode Island... Treaty with France...
Click image to enlarge 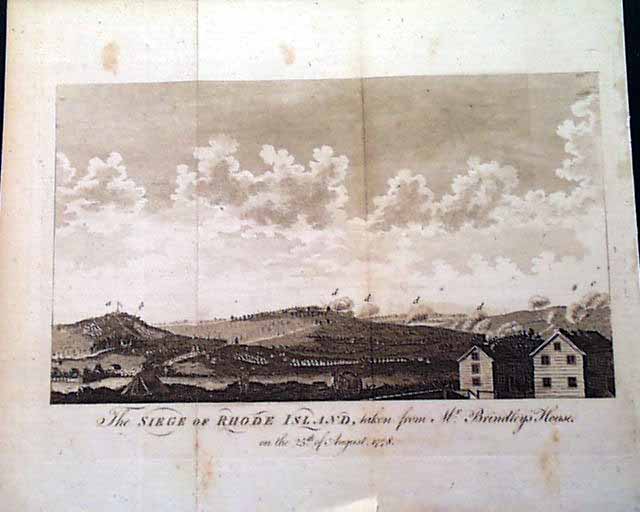 Print of the siege of Rhode Island... Treaty with France...

Item # 636688 GENTLEMAN'S MAGAZINE, London, February, 1779  This issue leads off with reports on the debates in Parliament, which include discussion on the Revolutionary War, including: "...the conduct of the army under the command of Gen. Howe; he seized the opportunity of painting in the blackest colours the ingratitude of the Americans; & concluded with exhorting the House to unanimity in prosecuting the war against them..." with other items as well.
Perhaps the best content in this issue is the very nice fold-out plate titled: "The Siege Of Rhode Island, taken from Mr. Brindley's House, on the 25th of August, 1778." A rare print as this was the only landscape print of the entire Revolutionary War in this title.  Although it is called for in the May issue, the binder's notes call for it to be inserted at page 101, which is the February issue and where it is virtually always found. This plate folds out to measure 8 1/4 by 9 3/4 inches and is in very nice condition.
Perhaps of equal significance is this historic: "Copy of the Treaty of Alliance, Eventual and Defensive, between his Most Christian Majesty Louis the Sixteenth, King of France and Navarre, and the Thirteen United States of America, concluded at Paris, Feb. 6, 1778."  This is the entire text of the treaty of alliance signed in type: B. Franklin, Silas Deane & Arthur Lee, prefaced by a detailed testament by the King, signed in type: Louis. This alliance was an important factor in the war against England and had much to do with the Americans winning the Revolutionary War. Relating to the treaty, this issue also has "Silas Deane's Letter to the Citizens of America".
Under "Historical Chronicle" is news stating that: "Dr. Franklin is appointed by the Congress sole Minister Plenipotentiary to the court of France from the United States of America...". Also word that Col. Campbell and his troops arrived in Georgia and "...soon after their landing, they attacked and reduced the town of Savannah...", plus various details about the attack.
Includes the two plates called for (see).
Complete in 56 pages, 5 by 8 1/4 inches, full title/contents page with an engraving of St. John's Gate. Very nice condition.