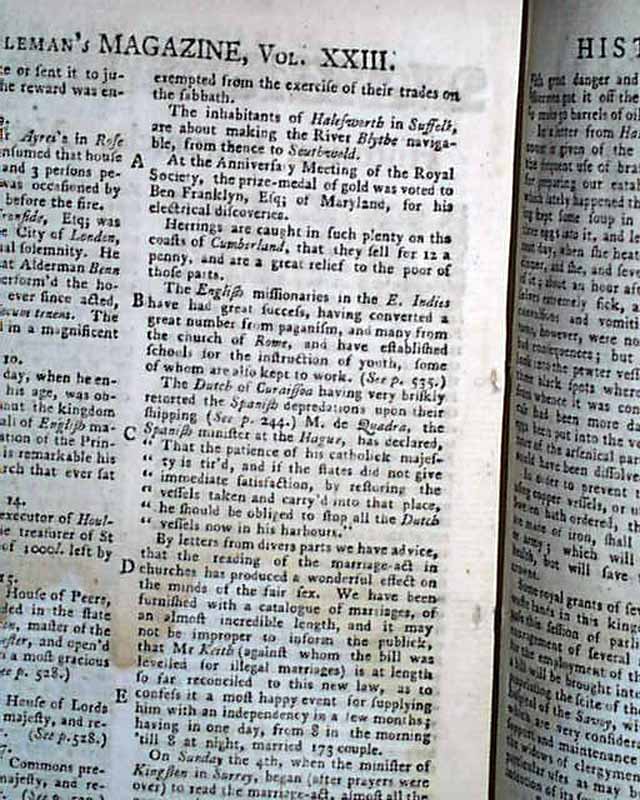 Item # 636672 THE GENTLEMAN'S MAGAZINE, London, November, 1753  Near the back of this issue (pg. 538) is a small & inconspicuous item reading: "At the anniversary meeting of the Royal Society the prize medal of gold was voted to Ben Franklyn, Esq. of Maryland, for his electrical discoveries."   Note that not only did they spell his name wrong but they have his home colony wrong.
At the back is the "Historical Chronicle" section with the latest news of the day & which includes a nearly full column under the heading: "America" with items from Boston and Virginia.
Included is one of the 3 full page plates called for, the "The Inside View of the Under Chappel of St. Thomas within London Bridge". There is also a half print print of the "Proboscis of an Amphibious Animal" with a related article.
Complete in 48 pages, full title/contents page featuring an engraving of St. John's Gate, 5 by 8 1/4 inches with several tiny binding holes along the left spine, some damp-staining, but is otherwise in nice condition.