Home > Back to Search Results > Much news from the Confederacy...
Click image to enlarge 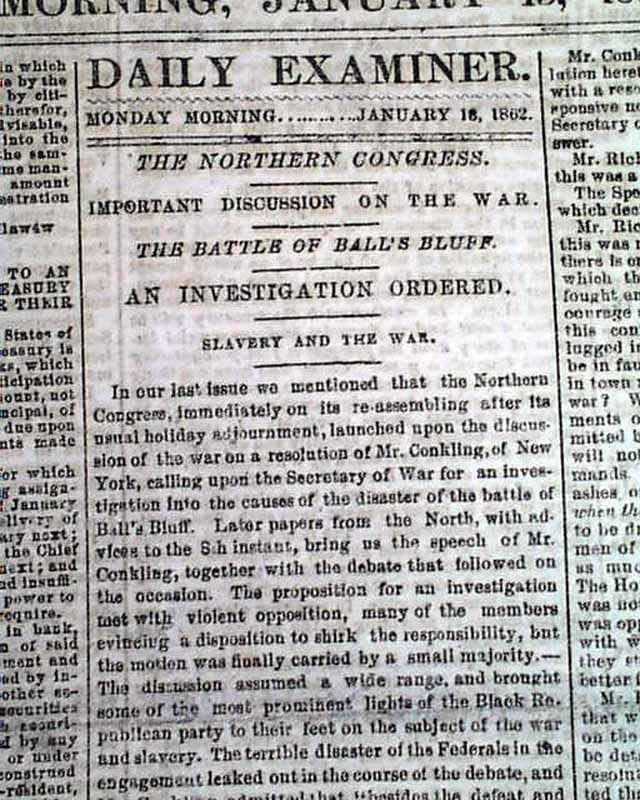 Much news from the Confederacy...


DAILY EXAMINER, Richmond, Virginia, January 13, 1862  Not only a nice Confederate newspaper, but one from the capital of the Confederacy. The front page has: "The Northern Congress--Important Discussion on the War--The Battle of Ball's Bluff--An Investigation Ordered--Slavery And The War" which takes over 2 columns. Also on the front page: "Notes Of The War" with subheads including: "From the South Carolina Coast--Federal Exploits on the Potomac--Shelling a House at Night--A Whole Family Driven out in the Snow". The front page also has several Acts from the Confederate Congress, as well as advertisements.
Page 2 has a great deal of reporting on the Civil War, from the Confederate perspective, with items headed: "The Latest Northern News--Movements & Spirit of the War--Lincoln to Be Superseded--The Burnside Expedition--The Health of General McClellan--A Federal Foraging Expedition--An Entire Division of the Army Out--Affairs of the Lower Potomac" and other subheads. Also: "Blockade of the Potomac", "What Is 'Treason?' ", "What The Spies Are Doing", "The New Gunboats--What the Navy Department Is Doing", "Confederate Suicide"  and some smaller items.
Page 3 also has some items on the War, plus some reports from the "Legislat6ure of Virginia", and "Telegraphic News" and various advertisements. The back page has both ads and many Acts from the Confederate Congress.
Four pages with a full banner masthead, never bound nor trimmed (desired), a minor archival mend to pg. 2 which is almost unnoticeable, very nice condition.