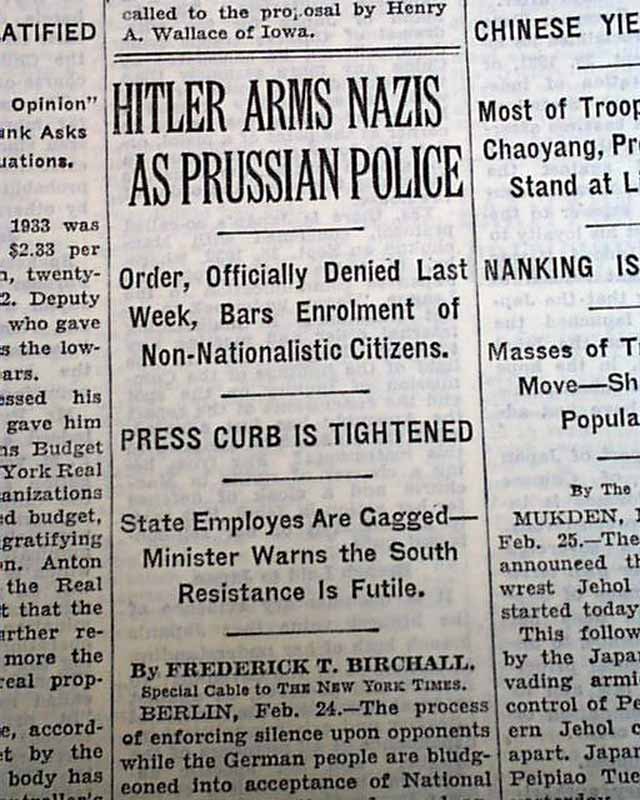 The front page has a very interesting article (carrying over to page 5) which seems to be the creation of the Gestapo, the feared Nazi secret police. The ftpg. one column heads note: "HITLER ARMS NAZIS AS PRUSSIAN POLICE" "Order, Officially Denied Last Week, Bars Enrollment of Non-Nationalistic Citizens" "Press Curb Is Tightened" "State Employees Are Gagged--Minister Warns the South Resistance Is Futile".
The report notes its creation by Hermann Goering and includes in part: "...German people are bludgeoned into acceptance of National Socialist domination...authorizing the arming of Nazi storm troopers and Stahlhelm members and their use as 'auxiliary police'..." with much more. See Wikipedia on the history of the Gestapo, which corroborates much of what is in the article (see). Always nice to have notable events in history reported in this World famous publication.
Other news, sports and advertisements of the day. Complete in 32 pages, this is the rare rag edition that was produced on very high quality newsprint, with a high percentage of cotton & linen content, allowing the issues to remain very white & sturdy into the present. Given the subscription cost, libraries & institutions rather than individuals were the primary subscribers of these high-quality editions. Nice condition.