Home > Back to Search Results > Guerrillas in Tennessee...
Click image to enlarge 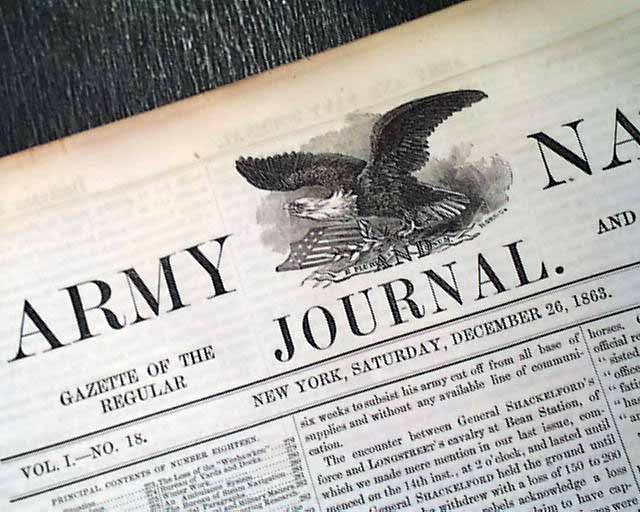 
ARMY & NAVY JOURNAL,  New  York, Dec. 26, 1863  As noted in the masthead this was the: "Gazette of The Regular & Volunteer Forces" and as such is replete with military news of all sorts. Most of the ftpg. is taken up with: "The Military Situation" reporting news from the various theaters of the war, & includes: "...What will be the future of General Longstreet's column still remains in obscurity..." and: "...Guerrilla bands continue to swarm in the interior of West Tennessee..." and much more. Among the inside page reports are: "The Virginia Campaigns" "From Port Royal" "Organization of Infantry" "Dept. of Missouri" "The Past, Present & Future of Fortification" "The Monitors" "Soldiers & Sailors" "The Late Major-General Buford" "Watching Rebel Privateers" and much more.
Sixteen pages, 10 by 14 1/2 inches, nice eagle in the masthead, very nice condition.