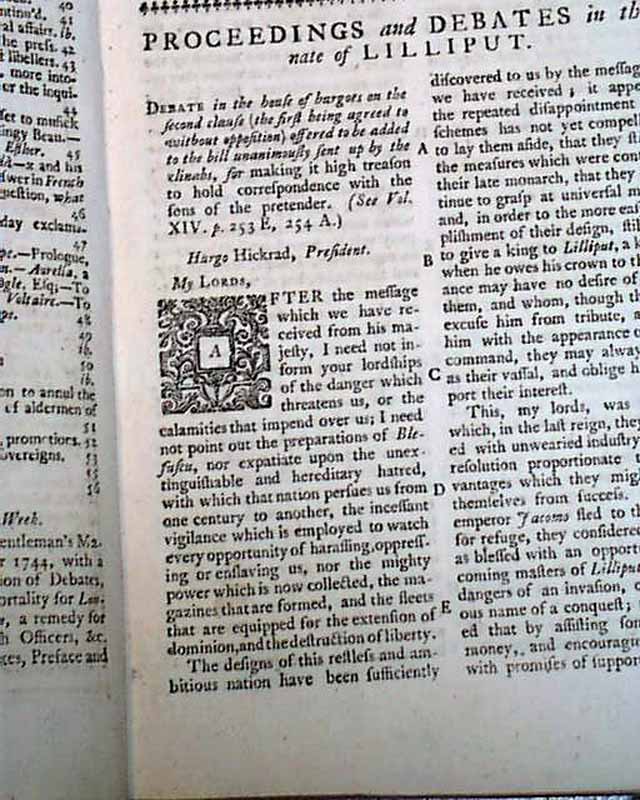 Item # 633108 THE GENTLEMAN'S MAGAZINE, London, January, 1745  Nearly 5 pages at the beginning of the issue are taken up with reports on events in Parliament under the guise of: "Proceedings & Debates in the Senate of Lilliput" as direct reporting on Parliamentary events was prohibited.
Over 1 1/2 pages are taken up with: "The case of Carolina Consider'd, with Regard to its Danger of being Invaded, for want of Regular Forces...". This is a great article on the defence of the colonies. Three-quarters of a page are taken up with: "A List of Privateers" (see).
Among other articles are: "Speech on the Report of the Hanoverian Troops for 1744" which takes over 15 pages; "Plan for Establishing a National Militia" and: "An Alarm on Naval Affairs" among many others.
Near the back is the "Historical Chronicle" which has various news reports from throughout Europe. Included is a report headed: "Extract of a Letter from N. York, Sept. 3". Also a report of "...some late discoveries in the N.W. of Hudson's bay..that a passage free from ice for some months in the year may be found from thence to the western & southern ocean of America..." (see).
No plates or maps are called for.
Complete in 56 pages, 5 1/2 by 8 1/2 inches with margins wider than normal, full title/index page with an engraving of St. John's Gate, very nice condition.