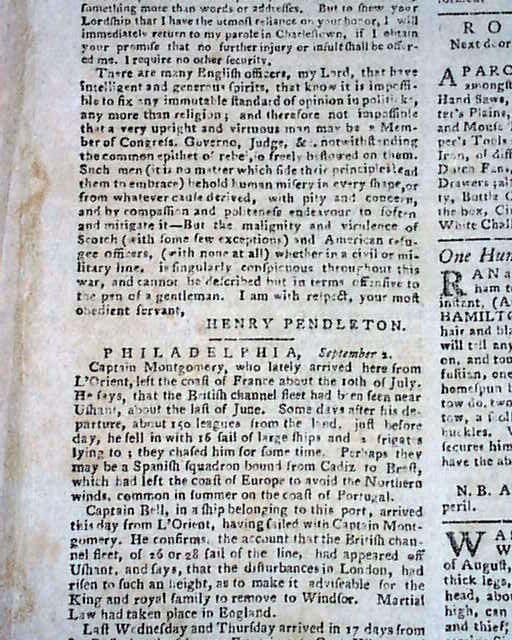 The front page has: "A Short Vindication of the Religious Society Called Quakers, against the aspersions of a nameless writer in the Pennsylvania Packet of the 12th instant", signed in type: John Drinker. Also: "Doctor Morgan's Appeal to the Free Citizens of the United States of America, on the subject of Doctor Shippen juniors impeachment and trial by a Court-Martial".
Page 3 has a letter from Henry Pendleton to Lord Cornwallis explaining his (Pendleton's) reasons for withdrawing from Charlestown without leave. The letter begins: "As my leaving Charlestown without leave of the Commandant may be represented as a breach of my parole, I take the liberty to state to your Lordship the reasons which urged me to take this step." Much more & signed in type: Henry Pendleton.
Page 3 also has a notice from Charles Wilson Peale stating that he has completed the menzotint print of General Washington. Back page has a reward notice for a runaway "Mulatto Slave, Named Dick".
Nice masthead has ornate lettering and an engraving of a ship. Complete in four pages, never-trimmed margins and in great condition.