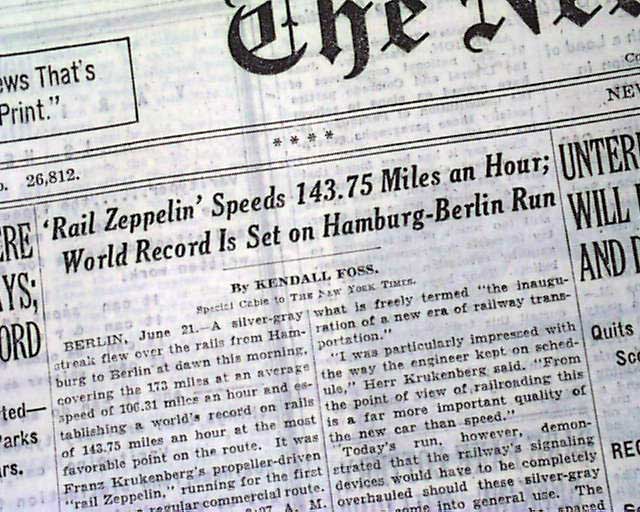 The top of the front page has a two column heading: "'Rail Zeppelin' Speeds 143.75 Miles an Hour; World Record Is Set on Hamburg-Berlin Run" (see)
Other news, sports and advertisements of the day. Complete in 40 pages, this is the rare rag edition that was produced on very high quality newsprint, with a high percentage of cotton & linen content, allowing the issues to remain very white & sturdy into the present. Given the subscription cost, libraries & institutions rather than individuals were the primary subscribers of these high-quality editions. Nice condition.

wikipedia notes: On 21 June 1931, Schienenzepplin set a new world railway speed record of 230.2 km/h (143.0 mph) on the Berlin–Hamburg line between Karstädt and Dergenthin, which was not surpassed by any other rail vehicle until 1954. The railcar still holds the land speed record for a petrol powered rail vehicle. This high speed was attributable, amongst other things, to its low weight, which was only 20.3 tonnes (20.0 long tons; 22.4 short tons).