Home > Back to Search Results > Battle of Chippawa... Much on the loss of the Essex...
Click image to enlarge 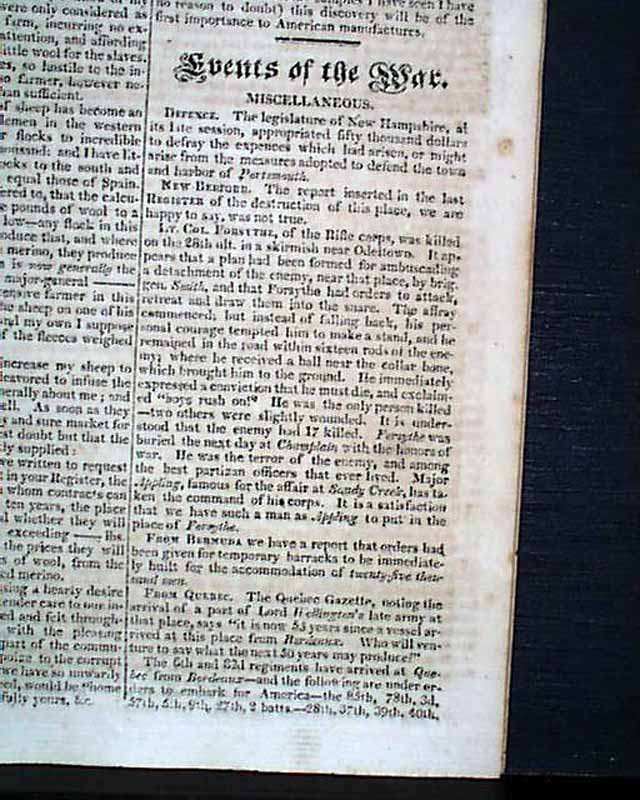 Battle of Chippawa... Much on the loss of the Essex...

THE WEEKLY REGISTER, Baltimore, July 16, 1814  The first several pages have much on American manufactures with various charts, including "Manufactures from Seed".
There is much content on the War of 1812 with most under the heading: "Events of the War" with smaller heads including: "Military" "Capture of Fort Erie--Battle of Chippewa" "General Orders" & more.
But the most significant content is the report from Captain David Porter on his naval battle off Valparaiso which caused the loss of his ship the Essex, with terrific detail and taking over 4 pages. Included is a report on the killed, wounded & missing which takes over a full column. And there are also several signed correspondences between D. Porter & the British commander James  Hillyar concerning the ultimate surrender.
The back page has: "A Brilliant Victory" which is a letter signed in type by Jacob Brown concerning the battle of Chippawa (see), with a brief reference to his victory at Fort Erie two days before.
Complete in 16 pages, 6 1/4 by 9 1/2 inches, some lite scattered foxing, otherwise in nice condition.