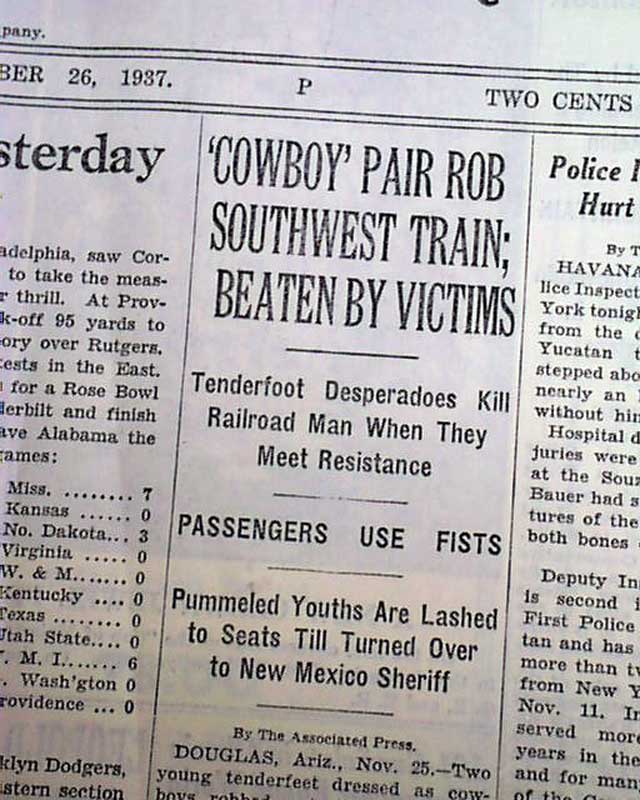 You might call it the official end of the "Wild West", but in any case the one column heading at the top of the front page announces what is considered the last major train robbery in the country: "'COWBOY' PAIR ROB SOUTHWEST TRAIN; BEATEN BY VICTIMS" with related subheads. (see) Always nice to have notable events in history reported in this World famous publication.
Other news, sports and advertisements of the day. Complete in 42 pages, this is the rare rag edition that was produced on very high quality newsprint, with a high percentage of cotton & linen content, allowing the issues to remain very white & sturdy into the present. Given the subscription cost, libraries & institutions rather than individuals were the primary subscribers of these high-quality editions. Nice condition.


wikipedia notes: Henry (Lorenz) Loftus and Harry (Dwyer) Donaldson were two young men who made national headlines for their unsuccessful attempt to rob the Southern Pacific Railroad's Apache Limited in 1937. The last major train robbery in the United States, the two have been referred to as "the last of America's classic train robbers". Though they were not professional criminals, their unhealthy fixation with the American Wild West prompted them to rob the train which resulted in the intentional wounding of one passenger and the accidental death of another.