Home > Back to Search Results > Rare title from the early Oneida Community...
Click image to enlarge 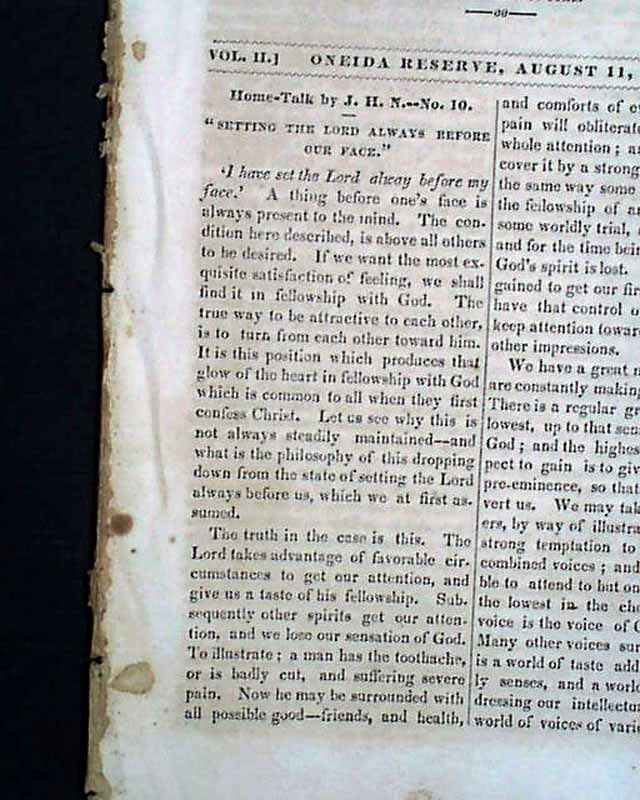 
THE SPIRITUAL MAGAZINE, Oneida Reserve, (New York), August 11, 1849  "The Oneida Community was in many ways the most radical social & sexual experiment in American history, founded in central New York by John Humphrey Noyes & a small band of Christian perfectionists in March, 1848. This community, which had evolved during the 1840's from an earlier group association in Putney, Vermont, dissolved as a communitarian venture in January, 1881, at which time the carefully restricted membership approached 300 men, women, & children. It then legally transformed itself into a capitalist enterprise known as the Oneida Community, Ltd., & in 1935 the company changed its name to Oneida, Ltd. It still functions as one of the world's leading silverware manufacturers." (credit Spencer C. Olin, Jr.)
This was their publication from near its founding year. The ftpg. article: "Home Talk, by J. H. N" is titled: "Setting The Lord Always Before Our Face" with a wide variety of other interesting articles within. Complete in 16 pages, 5 3/4 by 8 3/4 inches, nice condition.