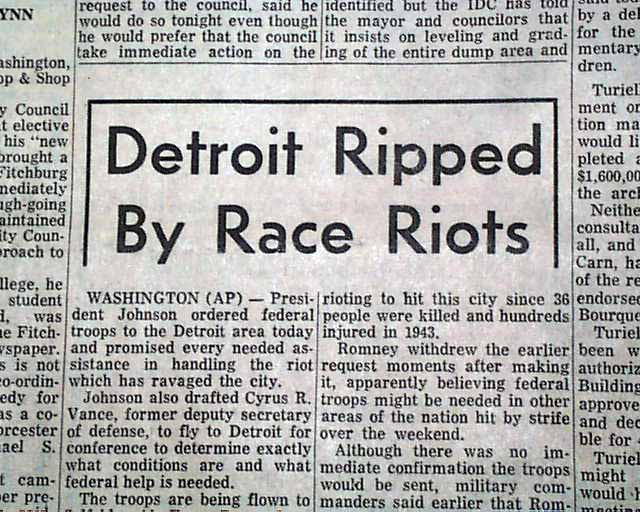 This 18 page newspaper has a two line, two column headline on the front page: "Detroit Ripped By Race Riots". Other news of the day throughout.Minor margin browning, otherwise in nice condition.
source: wikipedia: The 12th Street Riot in Detroit began in the early morning hours of Sunday, July 23, 1967. Vice squad officers executed a raid at a blind pig on the corner of 12th Street and Clairmount on the city's near westside. The confrontation with the patrons there evolved into one of the deadliest and most destructive riots in modern U.S. history, lasting five days and far surpassing the 1943 riot the city endured. Before the end, the state and federal governments, under order of then President Lyndon B. Johnson, sent in National Guard and U.S. Army troops and the result was forty-three dead, 467 injured, over 7,200 arrests and more than 2,000 buildings burned down. The scope of the riot was eclipsed in scale only by the 1992 Los Angeles riots. Detroit has never fully recovered from the after-effects of the riot and the negative domestic and international media coverage. The riot was prominently featured in the news media, with live television coverage, extensive newspaper reporting, and an extensive cover stories in Time magazine and Life on August 4, 1967. The Detroit Free Press won a Pulitzer Prize for its coverage.