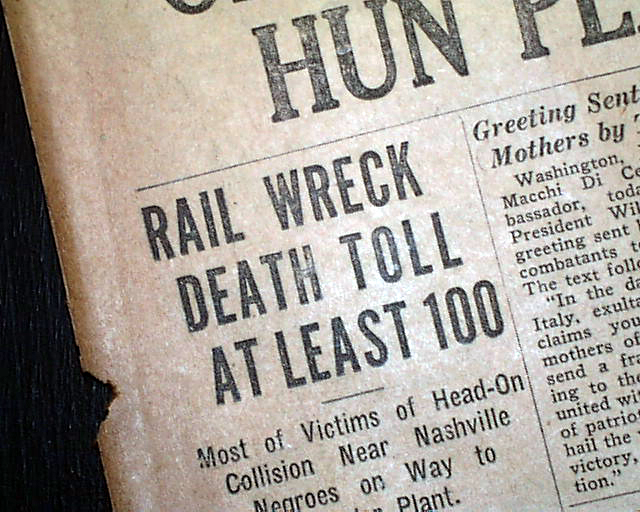 This 12 page newspaper has one column headlines the front page:
"RAIL WRECK DEATH TOLL AT LEAST 100" and "Most of Victims of Head-On Collision Near Nashville Negroes on Way yo Powder Plant" with smaller subheads.

Other news of the day with much on World War I. Usual browning with some margin wear, otherwise in good condition. Should be handled with care.

The two trains involved were the No. 4, scheduled to depart Nashville for Memphis, Tennessee at 7:00 a.m., and the No. 1 from Memphis, about a half-hour late for a scheduled arrival in Nashville at 7:10 a.m. At about 7:20 a.m., the two trains collided while traversing a section of single track line known as "Dutchman's Curve" west of downtown, in the present-day neighborhood of Belle Meade. Traveling at an estimated 50/60 miles per hour, the impact derailed both trains and completely destroyed several wooden cars.

An investigation by the Interstate Commerce Commission (ICC) attributed the cause of the accident to several factors, notably serious errors by the No. 4 crew and tower operators, all of whom failed to properly account for the presence of the No. 1 train on the line. The ICC also pointed to a lack of a proper system for the accurate determination of train positions, and noted that the wooden construction of the cars greatly increased the number of fatalities.