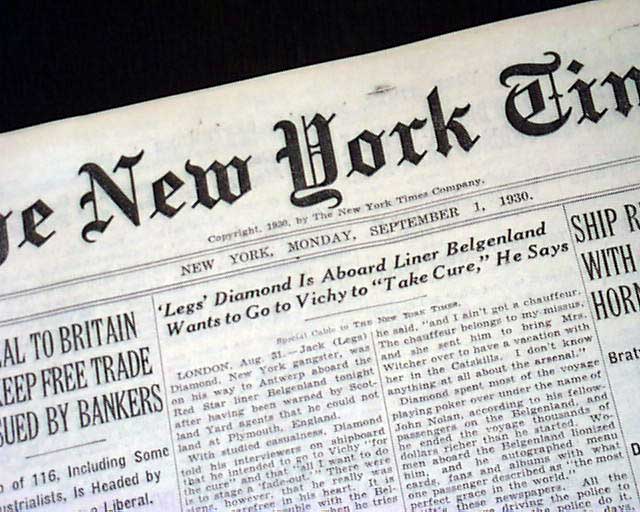 The top of the front page has a two column heading: "'Legs' Diamond Is Aboard Liner Belgenland Wants to Go to Vichy to 'Take Cure,' He Says" (see)
Other news, sports and advertisements of the day. Complete in 30 pages, this is the rare rag edition that was produced on very high quality newsprint, with a high percentage of cotton & linen content, allowing the issues to remain very white & sturdy into the present. Given the subscription cost, libraries & institutions rather than individuals were the primary subscribers of these high-quality editions. A little spine wear, otherwise nice.

wikipedia notes: In late August, 1930, Diamond boarded the ocean liner Belgenland in New York for a voyage to Antwerp, Belgium. He told reporters that his final destination was Vichy in France, where he would take a "cure" of the mineral waters for his health. However, the real reason was to look for sources of rye whiskey in Germany to illegally import into the United States. During the trip, Diamond allegedly won several thousand dollars in poker games with other passengers, who treated him like a celebrity. However, as soon as Diamond left the Belgenland, he was taken by Antwerp police to their headquarters. At the end of the day, Diamond agreed to voluntarily leave the country and was put on a train to Germany.