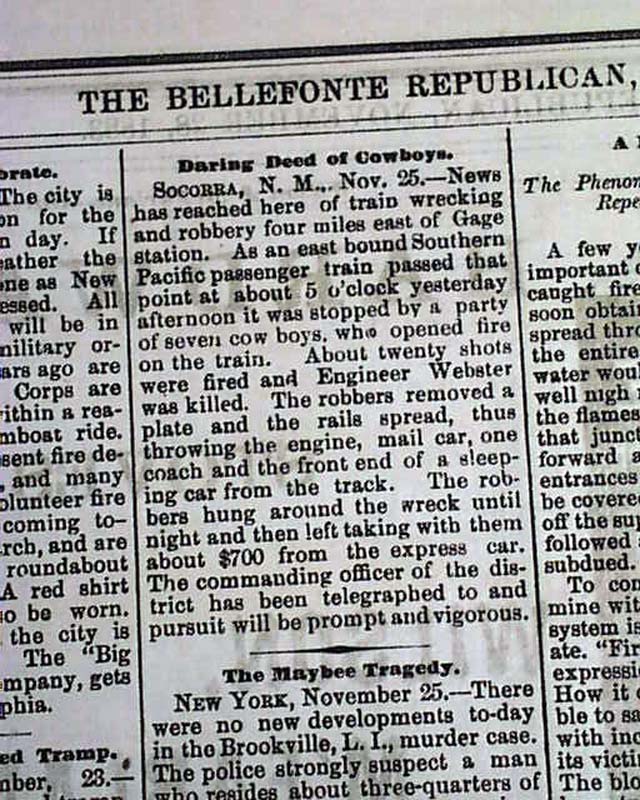 wikipedia notes: On November 24, 1883, a train robbery took place at a way station called Gage, near Silver City, with $830.60 being stolen. During the robbery, the train engineer, T.C. Webster, and the messenger, T.G. Hodgekins, were both shot and killed. Whitehill immediately set out for the robbers, leading a small posse. Whitehill first tracked down robber George Washington Cleavland, capturing him in Socorro, New Mexico. Whitehill convinced Cleavland his fellow robbers had all been captured, and that they had implicated him as the shooter of the engineer. Believing this, Cleavland denied he had killed the engineer, and made a full confession, detailing the robbery and his fellow robbers.

A short time later, Whitehill tracked down the other robbers, Mitch Lee, G.S. Collins, Frank Taggert, and Kit Joy. Less than two weeks later, while under guard by Deputy Dick Ware in the Silver City jail, Taggert and Lee overpowered Ware, while Joy took his guns. They then freed any other prisoners present, including Cleavland, took all guns from the jail, and fled. Whitehill organized a posse, and went in pursuit. Receiving information from a citizen of the escapees' direction of travel, Whitehill set up to capture them at a pass near the Pinos Altos Mountains. The posse opened fire, killing Cleavland immediately. A Mexican prisoner, Carlos Chavez, who had escaped with them was killed next, while the others dismounted and scampered for cover. Lee was mortally wounded a few minutes later, and Taggert, with no ammunition left, surrendered. Joy was able to make a break, shooting and killing posse member Joe Le Fur, while being wounded himself, hence escaping. Then, all of the escaped prisoners surrendered. Usually, those who had survived a shootout were to be taken back to the jail, but instead Whitehill and his posse hanged them on the spot.