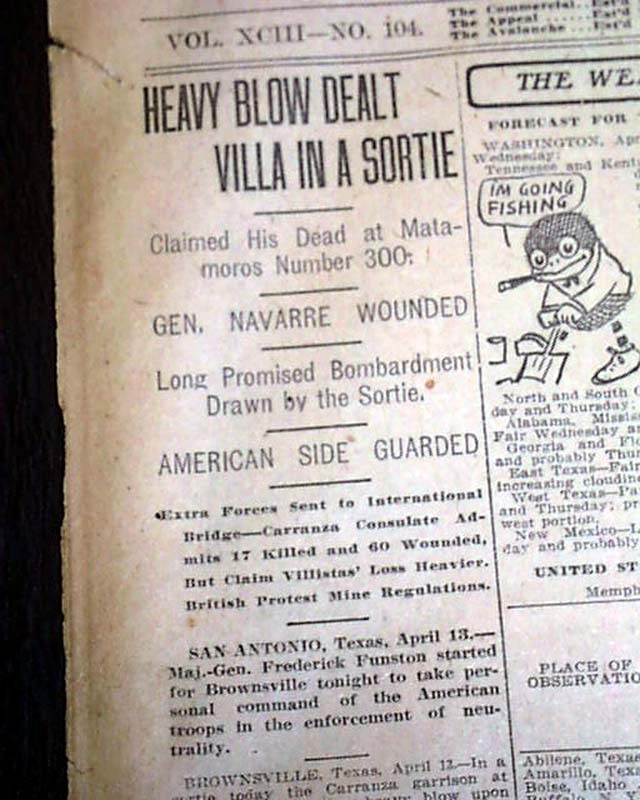 The front page has a one column heading: "HEAVY BLOW DEALT VILLA IN A SORTIE" with subheads. (see) First report coverage on the battle of Celeya in which Pancho Villa was badly defeated.
Sixteen pages, loose along the spine, light staining, somemargin and fold wear, should be handled with care.

wikipedia notes: The Battle of Celaya, which occurred near Celaya, Guanajuato on 13 April 1915, was a battle of the Mexican Revolution.

The Conventionist forces under Pancho Villa were badly defeated by forces under the command of Álvaro Obregón, who supported the presidency of Venustiano Carranza. Villa lost around 4,000 men killed in frontal attacks. He also lost 1,000 horses, 5,000 rifles, and 32 cannons. Approximately 6,000 of his men were taken prisoner. Of those captured, 120 of Villa's officers were executed.

In this battle, Obregón developed a defense "in depth" that proved very effective against the offense-heavy cavalry charges and artillery techniques used at that time, and was based on his study of the trench conflict (World War I) then raging in Europe. Although Obregón's lines weakened at times, he had sufficient reserves to bolster it at any point.

Villa had committed all his men to the attack and was unable to exploit any area of weakness or to protect his flanks which were enveloped by Obregón's cavalry.

The battle was a turning point in the future of Villa, the Revolution and Mexican history in the 20th century. Villa was never able to recover his losses, and with that lost most of his political and social influence.