Home > With the engraving... Drawing of the key to the Bastille...
Click image to enlarge 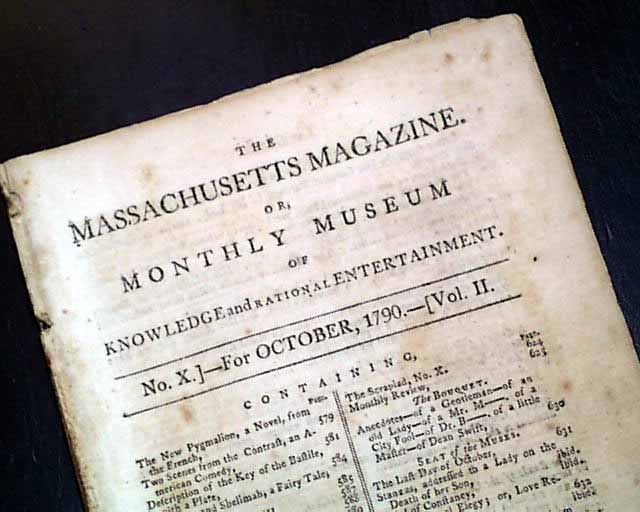 With the engraving... Drawing of the key to the Bastille...

THE MASSACHUSETTS MAGAZINE, Boston, October, 1790 The bulk of the issue is taken up with a wide range of eclectic articles as noted in the title/contents page. The issue begins with a story: "The New Pygmalion" which  is accompanied by a full page engraving titled: "I am an Orphan sir". Rare that this engraved plate is present as most were removed years ago. The plate has some margin wear & a few small archival mends to the blank reverse.
Also included is a full page engraving, with some text, of an: "Exact Representation of the Key of the Bastille" which was recently stormed & destroyed at the beginning of the French Revolution. Also within: "Description of Niagara Falls" and a lengthy: "Masonick Address".
At the back is "The Gazette" with the latest news of the day (see) and which also includes a curious letter from Scotland to a friend in Virginia concerning: "...a soldier lass who dressed herself in men's clothes...she served eight years without being discovered until she was wounded...She still wears men's clothes...".
Complete in 64 pages, full title/contents page, 5 by 8 inches, foxing to the title page, very nice condition.