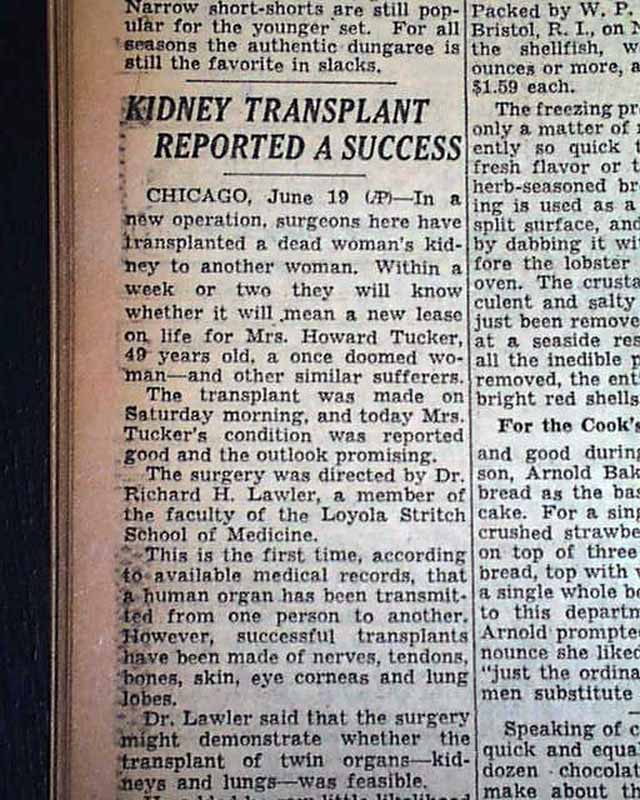 Tells of the very 1st Kidney transplant operation. Although a small inside page report, it is still a historic 1st report. It is what it is. Nice to have in this famous NYC title.

wikipedia notes: The first documented kidney transplant in the United States was performed June 17, 1950, on Ruth Tucker, a 44-year-old woman with polycystic kidney disease, at Little Company of Mary Hospital in Evergreen Park, Illinois, a Chicago suburb. Although the donated kidney was rejected because no immunosuppressive therapy was available at the time – the development of effective antirejection drugs was years away – Tucker's remaining diseased kidney began working again and she lived another 5 years before dying of an unrelated illness.[citation needed] Thereafter, successful kidney transplantations were undertaken in 1954 in Boston and Paris. The Boston transplantation was done between identical twins to eliminate any problems of an immune reaction. The first kidney transplant in the United Kingdom did not occur until 1960, when Michael Woodruff performed one between identical twins in Edinburgh. Until the routine use of medications to prevent and treat acute rejection, introduced in 1964, deceased donor transplantation was not performed. The kidney was the easiest organ to transplant, tissue-typing was simple, the organ was relatively easy to remove and implant, live donors could be used without difficulty, and in the event of failure, kidney dialysis was available from the 1940s. Tissue typing was essential to the success: early attempts in the 1950s on sufferers from Bright's disease had been very unsuccessful. In 1954, at Brigham Hospital Dr. Joseph E. Murray and Dr. J. Hartwell Harrison performed the world's first successful renal transplant between genetically identical patients, for which Dr. Murray received the Nobel Prize for Medicine in 1990. The donor is still alive as of 2005; the recipient died eight years after the transplantation.

The major barrier to organ transplantation between genetically non-identical patients lay in the recipient's immune system, which would treat a transplanted kidney as a "non-self" and immediately or chronically, reject it. Thus, having medications to suppress the immune system was essential. However, suppressing an individual's immune system places that individual at greater risk of infection and cancer (particularly skin cancer and lymphoma), in addition to the side effects of the medications.

The basis for most immunosuppressive regimens is prednisolone, a corticosteroid. Prednisolone suppresses the immune system, but its long-term use at high doses carries a multitude of side effects, including glucose intolerance and diabetes, weight gain, osteoporosis, muscle weakness, hypercholesterolemia, and cataract formation amongst others. Prednisolone alone is usually inadequate to prevent rejection of a transplanted kidney. Thus other, non-steroid immunosuppressive agents are needed, which also allow lower doses of prednisolone.