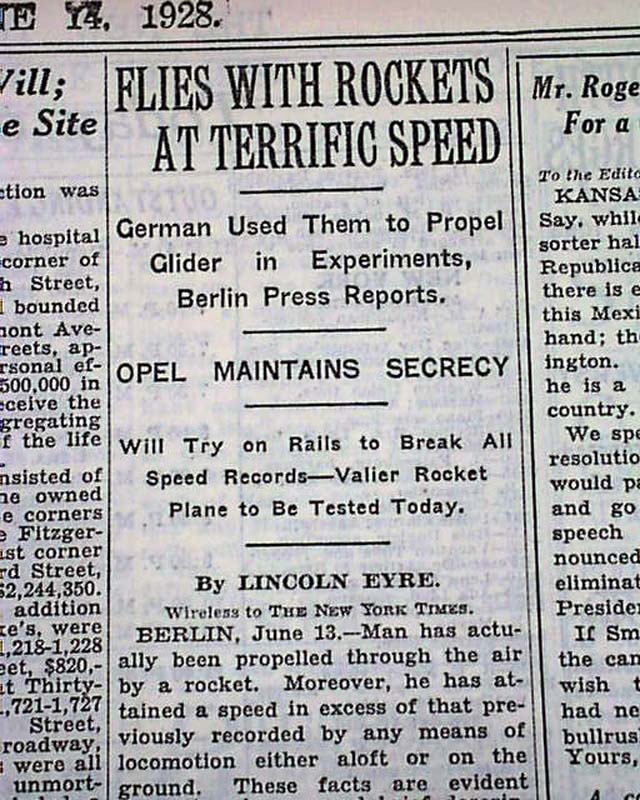 Page 29 has one column headings that include: "FLIES WITH ROCKETS AT TERRIFIC SPEED" "German Used Them to Propel Glider in Experiments. Berlin Press Reports" "OPEL MANTAINS SECRECY" and more. (see) First report coverage on the very 1st flight by a rocket powered aircraft. I suspect this is one of the few publications to report this particular event as other titles in our inventory do not.

wikipedia notes: The Ente (German: duck) was the world’s first rocket-powered full-size aircraft. It was designed by Alexander Lippisch as a sailplane and first flown under power on June 11, 1928, piloted by Fritz Stamer.

Other news, sports and advertisements of the day. Complete in 56 pages, this is the rare rag edition that was produced on very high quality newsprint, with a high percentage of cotton & linen content, allowing the issues to remain very white & sturdy into the present. Given the subscription cost, libraries & institutions rather than individuals were the primary subscribers of these high-quality editions. Minor spine wear, very nice condition.