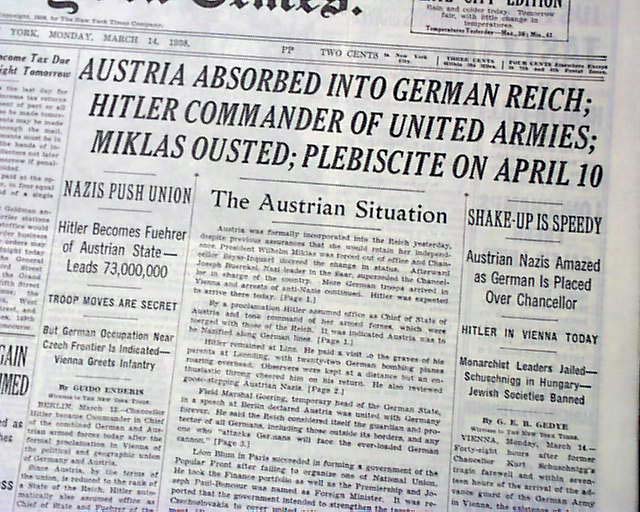 The front page has a nice four column headline: "AUSTRIA ABSORBED INTO GERMAN REICH; HITLER COMMANDER OF UNITED ARMIES; MIKLAS OUSTED; PLEDISCITE ON APRIL 10" with many subheads.
Page 15 has one column headings that include: "CLARENCE DARROW IS DEAD IN CHICAGO" "Famous Criminal Lawyer Who Defended Loeb and Leopold Is Striken at 80" "Opposed Bryan in the Scopes 'Monkey Trial'..." and more with photo of Darrow. Text takes up about 3 columns. Always nice to have notable events in history reported in this World famous publication.
Other news, sports and advertisements of the day. Complete in 34 pages, this is the rare rag edition that was produced on very high quality newsprint, with a high percentage of cotton & linen content, allowing the issues to remain very white & sturdy into the present. Given the subscription cost, libraries & institutions rather than individuals were the primary subscribers of these high-quality editions. Very nice condition.