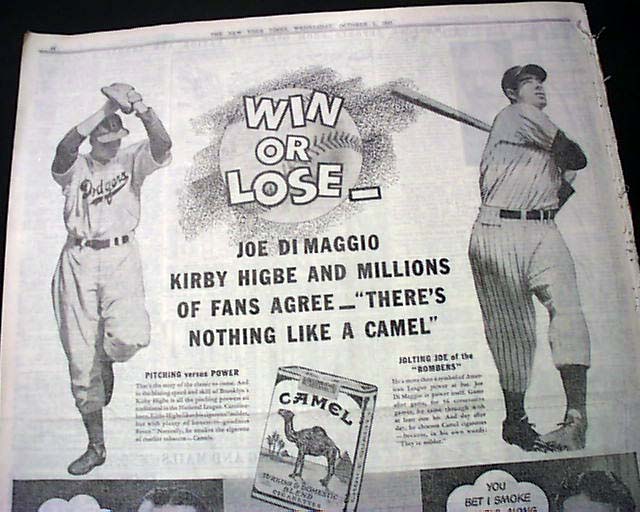 The back page has a great full page advertisement with Joe DiMaggio promoting Camel cigarettes. One photo shows DiMaggio actually smoking a cigarette with caption: "You Bet I Smoke Camels. Along With All That Swell Flavor, Camels Are Extra Mild" (see) You definitely would never see such an ad with a sport's star today.
Also much reporting on the opening day of the 1941 World Series between the Yankees and the Brooklyn Dodgers at Yankee Stadium. Coverage starts on the front page and continues in the sport''s section. See images for portion of the content.
Other news, sports and advertisements of the day. Complete in 44 pages, this is the rare rag edition that was produced on very high quality newsprint, with a high percentage of cotton & linen content, allowing the issues to remain very white & sturdy into the present. Given the subscription cost, libraries & institutions rather than individuals were the primary subscribers of these high-quality editions. Minor spine wear, very nice condition.