Home > Back to Search Results > First balloon flight across the Channel... Life of Capt. Cook... Freedom for slaves in Pennsylvania...
Click image to enlarge 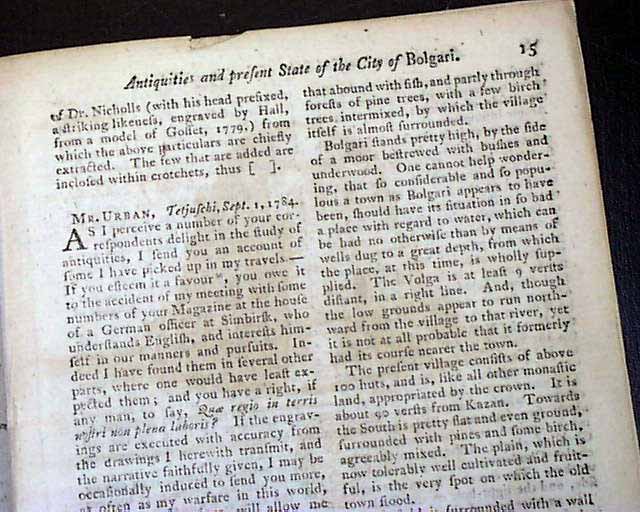 First balloon flight across the Channel... Life of Capt. Cook... Freedom for slaves in Pennsylvania...

Inside has an article: "Antiquities & Present State of the City of Bolgari" which includes a full page plate of some ruins, etc. (see). Other items include: "Letter from Christopher Columbus to the King of Spain" dated at Jamaica, 1503. Also: "A Sketch of the Life of the Late Capt. Cook" takes over 3 pages .
Under "Foreign Intelligence" are reports headed: "American News" which includes some detail of the abolition of slavery in Pennsylvania, noting in part: "...It is not, they say, for them to enquire why, in the creation of mankind the inhabitants of the several parts of the earth are distinguished by  difference in feature and complexion; it is sufficient for them to know that all are the work of an Almighty hand...Be in therefore enacted, that all persons, as well Negroes and Mulattoes...who shall be born within this state...shall not be deemed & considered as servants for life, or slaves..." with more (see).
A bit further on is over a full page on the very first crossing of the English Channel by balloon, accomplished by Mr. Blanchard and Dr. Jeffries (see), including a letter from Calais signed by: Blanchard. See this hyperlink for more on this very historic event.
In addition to the two plates mentioned is a nice foldout plate of an: "Ancient Altarpiece...at Lichfield."
Complete in 80 pages, 5 by 8 inches, full title/contents page with an engraving of St. John's Gate, the first 2 interior leaves are a bit ragged at the margins, generally very nice, clean condition.