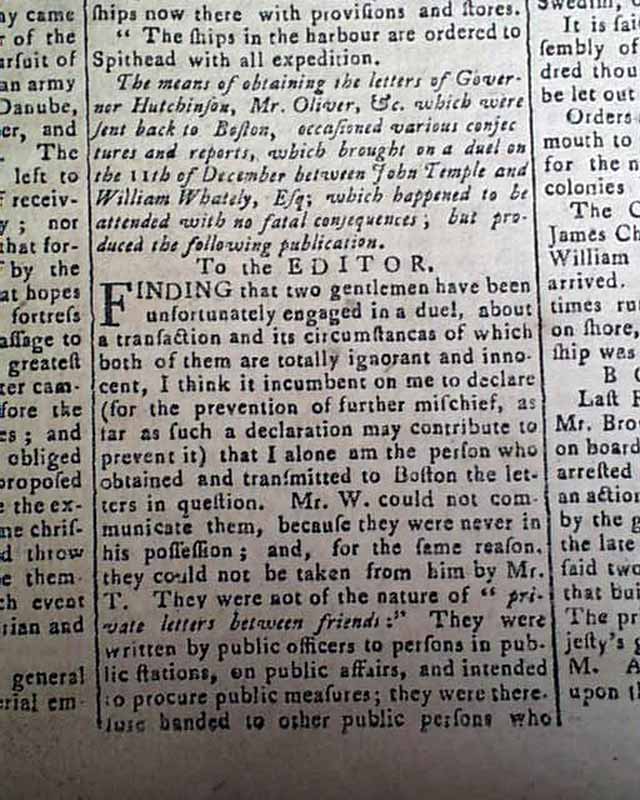 
CONNECTICUT JOURNAL & NEW HAVEN POST-BOY, March 18, 1774  The front page contains an extremely significant letter signed in type by: B. Franklin, as the agent in London for the Mass. legislature. This letter was a critical piece in the "Hutchinson Letters Affair", an incident which increased tensions between the colonists and England before the Revolution. See the hyperlink for much detail, but in general a series of letters written by Gov. Hutchinson & Andrew Oliver to Parliament were received by Ben Franklin & send to key people in Mass. with strict orders they were not to be published. The letters caused outrage, and at the time the "mole" was not revealed until a duel was fought between two who suspected each other of releasing the letters. As one website notes: "...Finally Franklin decided to end this nonsense and ‘fess up in a December 25, 1773 editorial in the London Chronicle. In it, he took full responsibility as the person who had received the letters. Ben made the case that the letters “were written by public officers to persons in public stations, on public affairs” and stated outright that “Their tendency was to incense the Mother Country against her Colonies and, by the steps recommended, to widen the breach”. (see this hyperlink)
The front page of this issue contains that letter (see), including in part: "...I think it incumbent on me to declare (for the prevention of further mischief, as  far as such a declaration may contribute o prevent t) that I alone am the person who obtained & transmitted to Boston the letters in question..." with more, and is signed in type by Franklin.
Pages 2 & 3 contain lengthy reports concerning Connecticut claims to land in Pennsylvania, referred to as the "Susquehannah Scheme".
Four pages, never bound nor trimmed with wide margins, handsome engraving in the masthead, nice condition.