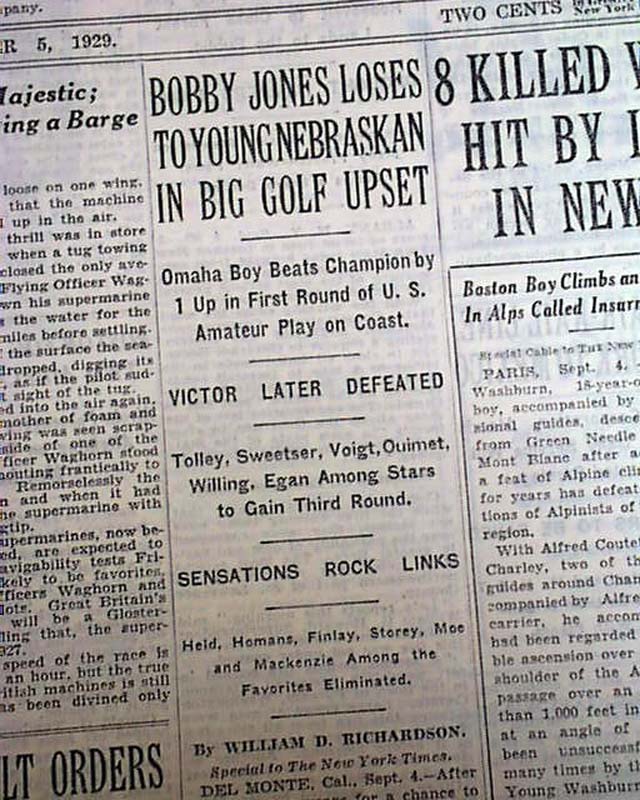 The top of the front page has a one column heading: "BOBBY JONES LOSES TO YOUNG NEBRASKAN IN BIG GOLF UPSET" with subheads. (see) More in the sport's section with banner headline: "Jones Loses to Goodman in Day of Sensational Upsets in U.S. Amateur Golf" & subheads, stats and photos. Loads of text. Always nice to have notable events in history reported in this World famous publication.
Other news, sports and advertisements of the day. Complete in 60 pages, this is the rare rag edition that was produced on very high quality newsprint, with a high percentage of cotton & linen content, allowing the issues to remain very white & sturdy into the present. Given the subscription cost, libraries & institutions rather than individuals were the primary subscribers of these high-quality editions. Minor spine wear, very nice condition.

wikipedia notes: John George Goodman was the last amateur golfer to win the U.S. Open, 82 years ago in 1933, and also won the U.S. Amateur in 1937. He gained national notoriety at age 19 in 1929 when he defeated Bobby Jones in the first round of match play competition at the U.S. Amateur at Pebble Beach.