Home > Back to Search Results > An early flying machine...
Click image to enlarge 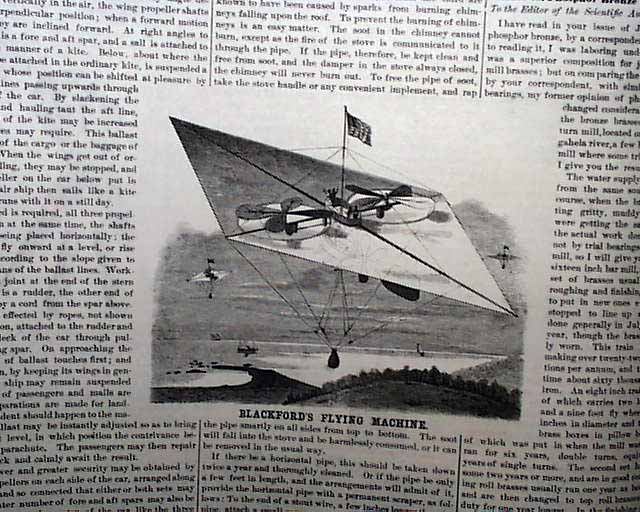 
SCIENTIFIC AMERICAN, New York, Feb. 13, 1875  An inside page has a 4 by 5 illustration of "Blackford's Flying Machine". The companion report headed "A New Form of Flying Machine", begins with the solution to successful flight: "Screw propulsion is the principle upon which will, probably, be accomplished the great problem of aerial flight. The plan here proposed is a modification of the device presented...in a recent issue....The horizontal driving shaft is attached below the spar, above which the wing propellers revolve in opposite directions..." and more. The report concludes with an interesting observation about the benefits of flight, mentioning that: "...The time may yet come when...nations will be brought into such easy, rapid, frequent, and intimate commercial and social connection as to result in a grand unity in language, law, and government on earth."
The issue also has images of the New York City Underground Railway at "125th Street - The Harlem Open Cut and Cross Street Bridges".
Sixteen pages, nice condition.