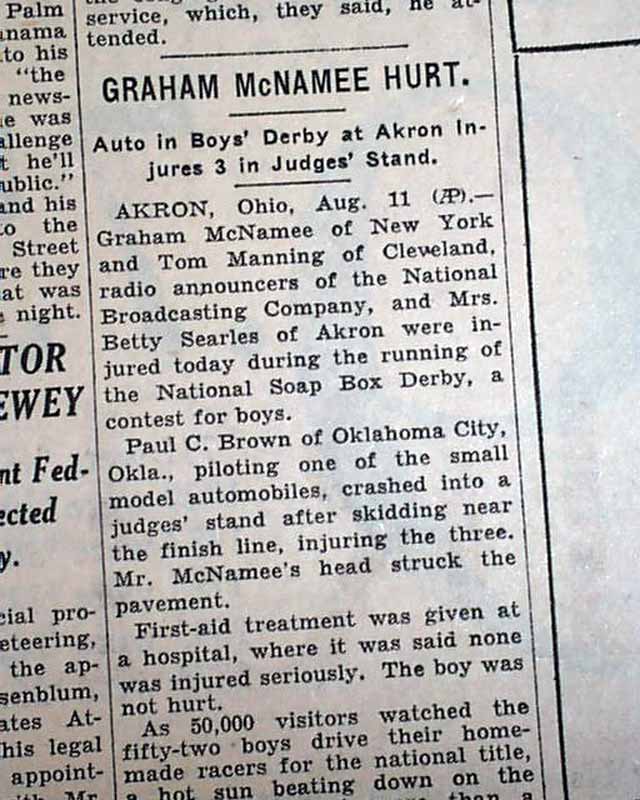 This 34 page newspaper has one column headlines on page 8:  "GRAHAM McNAMEE HURT" "Auto In Boys' Derby at Akron Injures 3 in Judges' Stand" 1st report coverage on the 2nd annual soap box derby in Akron, Ohio. The 1st derby was mostly of local interest only and was not reported in newspapers across the country except probably the newspaper from Akron of course. The 2nd derby gained some national interest with an accident that involved famed broadcaster Graham McNamee. See wikipedia below for further description. I'm sure most newspapers across the country did not report this as the New York Times was much more likely to contain most news of the day . This is the reason for the somewhat small, inside page report.
Other news, sports and advertisements of the day. Complete in 34 pages, a little margin wear, generally nice.

wikipedia notes: An accident in 1935 captured the public's interest, and boosted the event's profile. A car went off the track and struck NBC's top commentator and sportscaster Graham McNamee while he was broadcasting live on the air. Despite a concussion and other injuries (which would necessitate a two-week hospital stay), McNamee described the collision to his listeners and finished his broadcast.