Home > Back to Search Results > The Stamp Act is repealed...
Click image to enlarge 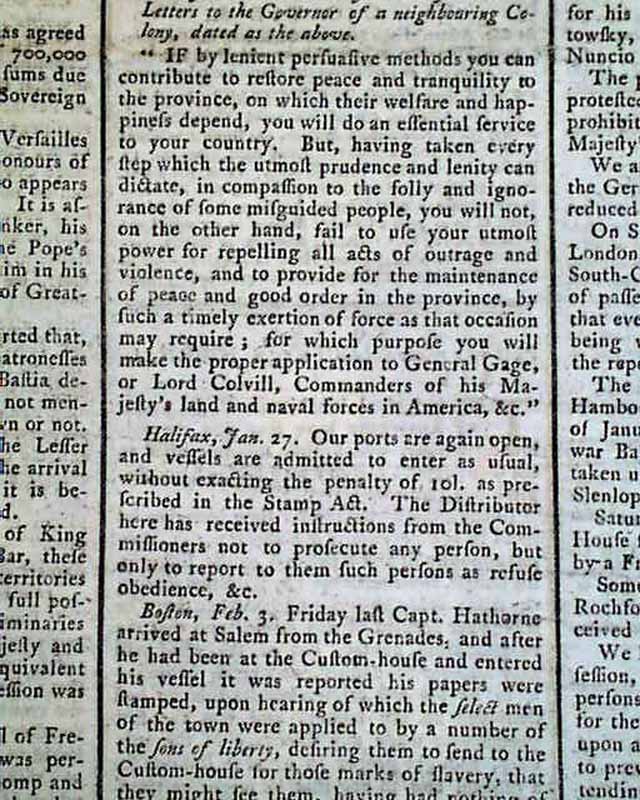 The Stamp Act is repealed...

* Repealing the Stamp Act, in a English publication

The front page  has more than a full column taken up with reports headed "America" which include: "...ports are again open & vessels are admitted to enter as usual without exacting the penalty of 10 pounds as prescribed in the Stamp Act. The Distributor here has received instructions from the Commissioners not to prosecute any person but only to report to them such persons as refuse obedience" and a report from Boston which notes: "...was reported his papers were stamped, upon hearing of which the select men of the town were applied to by a number of the sons of liberty..." and an item from Philadelphia notes: "...a bond for a Mediterranean pass with an American stamp to it, was burnt at the Coffee house here."
Page 2 includes an: "Abstract of a Letter from Florida, dated Mobile, Oct. 20, 1765..." (see).
Also on pg. 2 is an: "Abstract of the late Act of Parliament for the better securing the Dependance of his Majesty's Dominions in America on the Crown of Great Britain" concerns the illegal imposing of duties & taxes by the colonies themselves, and includes: "...That the said colonies have been, are, and of right ought to be subordinate unto & dependent upon the Imperial Crown & Parliament of Great Britain..." with more (see).
But certainly the most significant item is headed: "Abstract of the Act to Repeal the Stamp Act" which includes: "This Act....might be productive of consequences greatly detrimental to the commercial interest of these kingdoms, it is therefore, from & after May 1, 1766...hereby repealed & made void to all intents & purposes whatsoever." (see for full text).
Page 3 includes news from Canada, including a letter from Montreal, with some nice content (see for portions).
The back page is filled with ads. Four pages, folio size, decorative masthead, excellent condition.