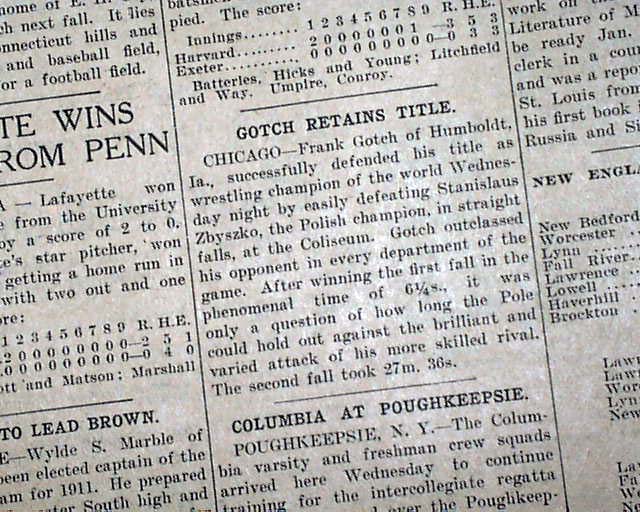 wikipedia notes: Frank Alvin Gotch ( April 27, 1878 - December 16, 1917) was an American professional wrestler of German ancestry, the first American to win the world heavyweight free-style championship, and credited for popularizing professional wrestling in the United States. He competed back when the contests were largely legitimate (see catch wrestling), and his reign as World Heavyweight Champion (from 1908 to 1913) is one of the ten longest in the history of wrestling. He became one of the most popular athletes in America from the 1900s to the 1910s.

As undisputed free-style heavyweight champion of the world, Gotch spent the next three years establishing his dominance over the sport, defeating the likes of Jenkins, Dr. Ben Roller, and Stanislaus Zbyszko, who was believed to have won over 900 matches before falling to Gotch on June 1, 1910. The victory over Zbyszko was particularly spectacular, Gotch taking both falls in slightly less than half an hour, and thoroughly dominating his European opponent. He took the first fall in just six seconds with a surprise move and quick pin, and won the second fall in only 27 minutes. Gotch outmaneuvered and outclassed Zbyszko every second of the match.