Home > Back to Search Results > Birth of a prince... Poem on playing cards...
Click image to enlarge 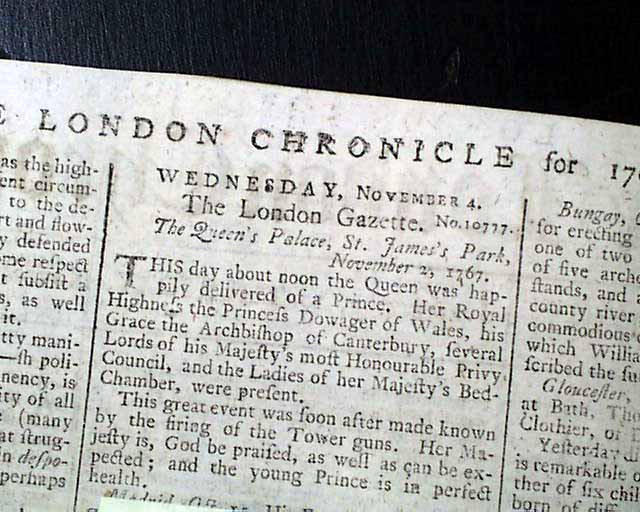 Birth of a prince... Poem on playing cards...


THE LONDON CHRONICLE, England, Nov. 5, 1767  Page 2 has a report announcing the birth of a son to King George III, with: "This day about noon the Queen was happily delivered of a Prince...This great event was soon after made known by the firing of the Tower guns. Her majesty is, God be praised, as well as can be expected; and the young Prince is in perfect health." This was Prince Edward Augustus who would become the Duke of Kent.
The same page has a report headed: "America -- Philadelphia" (see). Also, a report from London beginning: "Last night...the remains of his late Royal Highness the Duke of York was deposited in the royal vault in King Henry the VIIth's chapel..." with a bit more (see).
Another page has nearly a full column poem on playing cards, titled: "Card-Playing Philosophized--Addressed to a Young Lady with a Pack of Cards." Perhaps the earliest poem themed on card playing? The balance of the issue is taken up with various reports from Europe from just 8 years before the outbreak of the Revolutionary War. Many advertisements as well.
Eight pages, 8 1/2 by 11 inches, very nice condition.