Home > Back to Search Results > Fall of the Soviet Union... Great pair of issues...
Click image to enlarge 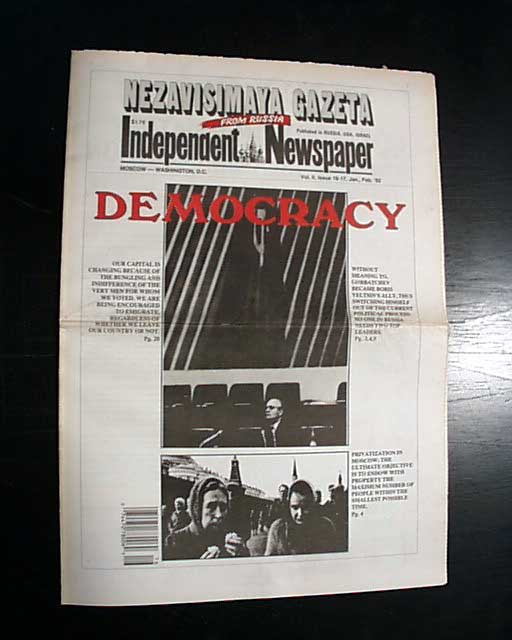 Fall of the Soviet Union... Great pair of issues...


(2) A fascinating pair of newspapers, destined to be the premier newspapers on the coup and collapse of the Soviet Union. Both double-titled: "NEZAVISIMAYA GAZETA/INDEPENDENT NEWSPAPER".
Issue #1: Datelined Moscow & Washington, August, 1991 The Nezavismaya Gazeta defied orders & worked through the night, handing out crude newspaper copies to people on the streets, and faxing their texts to their publisher in Washington who normally published their English edition. Because there was no time to publish separate Russian & English editions, this issue was published in both languages. Front page photo with red stamp across it reading: "Banned News Defies Coup", with great text on the events of the coup. Historic reading! Page 5 editorial by the Editor-in-Chief captioned: "At this moment outlawed in the U.S.S.R. 4 a.m. Aug. 20, 1991".
Issue #2: Datelined Moscow & Washington, January-February, 1992 In bold red ink across the top is "DEMOCRACY", including a lonely photo of Gorbatchev. This issue printed entirely in English, with terrific reading on the collapse of the Soviet Union.
Both issues are tabloid-size complete in 8 and 20 pages respectively. One of the best pair of issues to be had on the fall of the Soviet Union. I've not seen any of these issues on the open market since they were printed nearly 30 years ago.