Home > Back to Search Results > The Tariff Bill of 1833... Jackson's Force Bill...
Click image to enlarge 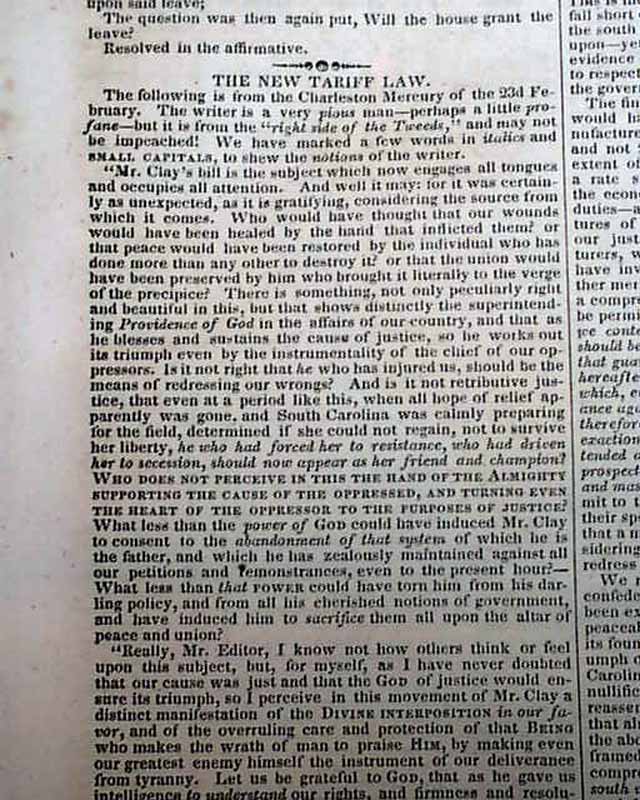 
NILES' WEEKLY REGISTER, Baltimore, March 16, 1833  Among the articles is: "The New Tariff Law" which is discussion of it taking 2 pages, with several reports, and includes: "...The great objects are to abolish the protective policy, and to reduce the revenue to the legitimate wants of the government. Both of these objects will be accomplished by this measure..." and also: "...The bill gives up the protective principle and will abandon the protective policy; we give them time so that the system may be let down gradually..." and also: "It will be seen that Mr. Clay's bill for the gradual reduction of the tariff...has passed the house of representatives & there is no doubt that it has also passed the senate & become a law..." and so much more.
Included as well is the vote of: "Yeas and Nays in the House of Representatives" on both the Tariff bill and the Enforcing bill (see).
The Tariff of 1833, proposed by Henry Clay and John C. Calhoun, was a resolution to the Nullification Crisis. It was adopted to gradually reduce the rates after Southerners objected to the protectionism found in the Tariff of 1832 and the 1828 Tariff of Abominations, which had prompted South Carolina to threaten secession from the Union.
Complete in 16 pages, 6 1/4 by 9 3/4 inches, great condition.